The other day I realised that one reason I like languages is because I enjoy just saying foreign words and phrases, especially ones that contain sounds and combinations of sounds not used in English. I imitate native speakers as best I can – not just the sounds of the words, but the intonation, and even pitch of their voices as well.

Maybe I’ll learn some other languages just to have fun pronouncing them. Languages with clicks, like Zulu and Xhosa, or with ejectives, like Georgian. I already know some songs in these languages, so it would be quite useful to know a bit more about them. It would also be interesting to visit places where they’re spoken, and to use them, but that would not be a priority.

If I do this, I would search for the most interesting-sounding words and phrases, and also tongue twisters, rather than focusing on the most common words and grammatical patterns. I probably wouldn’t learn to speak and understand the languages, but would have fun anyway.

Here are some tongue twisters to play with:

And here’s a tongue twister in Xhosa:

Have you learnt, or are you learning, any languages because you like the sound of them and enjoy pronouncing them? Yesterday I started learning Slovenian (slovenščina) in preparation for the Polyglot Conference in Ljubljana in Slovenia in October. I always try to learn at least a little of any languages I’m likely to encounter on my travels – it’s only polite.

I’m using a Memrise course, and may use other resources – if you have any suggestions, do let me know.

A few years ago I went to a polyglot conference in Novi Sad in Serbia, and learnt some Serbian before going there. Slovenian seems to have a lot in common with Serbian, so far.

There was a lass from Ljubljana learning Irish in Ireland last week, and she taught me a few useful Slovenian phrases. An interesting Russian word I learnt this week is глупый (glupyj) [ˈɡlupɨj], which means silly, stupid, foolish or inane, but sounds like one of the seven dwarfs.

The Russian name for the dwarf dopey is actually Простак (Prostak), which means simpleton.

Глупый comes from the Proto-Slavic *glupъ (stupid, foolish), which possibly comes from a Germanic source. Cognates in Germanic languages include glópr (idiot) in Old Norse, and glópur (fool, idiot) in Icelandic.

Cognates in Slavic languages include:

A related word in Russian is тупой (typoj) [tʊˈpoj], which means ‘dull, blunt; obtuse; dull, stupid’. It comes from the Old East Slavic тупъ (tupŭ), from Proto-Slavic *tǫpъ, and sounds like the Welsh word twp [tʊp], which means stupid. Is there any connection?

The word stupid comes from the Middle French stupide (stupid), from the Latin stupidus (struck senseless, amazed), from stupeō (to be amazed or confounded, to be struck senseless), from the Proto-Indo-European *(s)tup- / *(s)tewp- (to wonder), from *(s)tu- (to stand, stay).

I thought I’d made up the word gloopy, but it does exist, and means ‘Having a glutinous, sloppy consistency’. The Polyglot Conference is over now for another year, and I arrived back to Bangor yesterday. Although the conference only lasted two days, a lot was packed into that time.

On the Friday I went on a Golden Circle tour with two coach loads of other polyglots. Unfortunately it was a wet, cloudy and cold day, so the views were not great, but the landscape we could see was rather fine.

The first stop was Þingvellir (Thingvellir), a World Heritage Site where the North American and Eurasian tectonic plates meet. It is also where the Iceland parliament (Alþingi) met from AD 930 until 1798.

Next we went to Geysir, and area of volcanic activity with a number of sprouting hot springs, including the famous Great Geysir, which is currently inactive, and Stokkur, which erupts every few minutes (see photo below). We also had lunch here – there are a number of eating places and souvenir shops in the complex near the hot springs. I was expecting the whole place to stink of sulphur, but it didn’t really. Our final stop was Gullfoss (“Golden Falls”), waterfalls in the canyon of Ölfusá river. They were spectacular, and well worth seeing. In the evening, after we arrived back in Reykajvik, I went for dinner at an Indian restaurant with a few other polyglots.

The conference started on Saturday morning with interesting speeches by Dr Sebastian Drude, the director of the Vigdís International Centre for Multilingualism and Intercultural Understanding, and Vigdís Finnbogadóttir, the former President of Iceland and UNESCO Goodwill Ambassador for languages.

Then there were talks on a variety of topics, with themes including Icelandic language and culture, bilingualism and autism, and maintaining ‘small’ languages. Some of the speakers were lecturers or researchers in universities, others were language enthusiasts. The talks I found most interesting were the one by Daniel Tammet and Sigriður Kristinsdóttir about how he learnt Icelandic in a week with her help; one about bilingualism and autism, one about the cognitive effects of language learning, and one about Mongolian.

There was plenty of time between the talks and at lunch to catch up with old friends, meet new ones and practise languages. During my time in Iceland, I had conversations in English, Welsh, French, German, Spanish, Italian, Russian, Mandarin, Japanese and Irish, and spoke bits of Czech, Scottish Gaelic, Breton, Manx, Swedish and Icelandic.

Lunch was provided – small sandwiches and wraps, though didn’t appeal to me, so I bought something else in a supermarket. There weren’t any organised activities in the evenings, as there are at the Polyglot Gatherings. Instead babbles of polyglots went off to do their own thing. I went for dinner with some polyglot friends and had very interesting discussions about all sorts of things, not all of which were related to languages – we do have other interests. The next Polyglot Conference will be in Ljubljana in Slovenia from 5-7 October 2018 (as you might have guessed from this photo). So next year I will learn some Slovenian before the conference in Ljubljana, and some Slovak before the Polyglot Gathering in Bratislava in Slovakia.

On Monday I did some work on Omniglot in the morning, explored Reykjavik a bit, had lunch in a restaurant in the old harbour area of Reykjavik, did some more work, then explored a bit more with the two Russian teachers who were staying in the same place as me.

Iceland is a very expensive place, which I expected. Meals in restaurants cost at least twice as much as in the UK, as do most other things. It wasn’t as cold as I expected – about 7-10°C during the day and 2-5°C at night. All the locals I met speak very good English, but if you speak Icelandic, they’re happy to speak it with you. There are apparently quite a few people who have moved to Iceland recently for work, most don’t speak Icelandic. On a clear, dry day, the scenery is spectacular. Even on grey, wet days, it’s still impressive and dramatic. 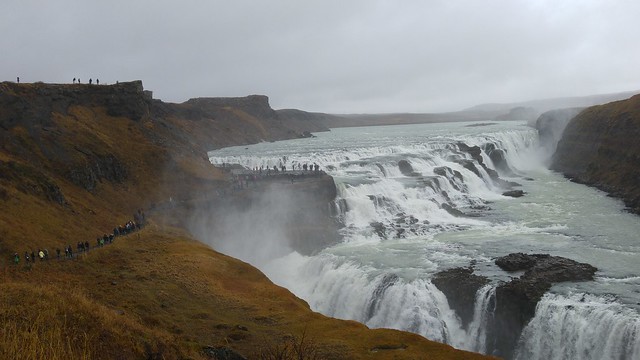