According to an article I came across today in the New York Times, quarantine has brought linguistic benefits to many bilingual homes.

Apparently in places where children have been spending a lot of time at home with their parents due to quarantine and lock downs, they have started speaking the non-dominant language(s) more.

For example, in Nigeria, where children are taught in English at school, but speak many other languages at home and elsewhere, they are now speaking more local languages, such as Luganda.

If you have a bilingual or multilingual household, have you noticed any differences in language use recently?

A while ago I was approached by the Chartered Institute of Linguists (CIOL) asking if I’d like to by interviewed for their journal, The Linguist. They were looking for linguists and others involved with languages who have set up language-related businesses.

This sounded like a good thing to do, and I was interviewed over the phone. Some months latter I was sent a copy of their magazine with the interview in it. I didn’t mention at the time as I was waiting for it to be available online. It is now available in the Februrary/March edition (page 7). 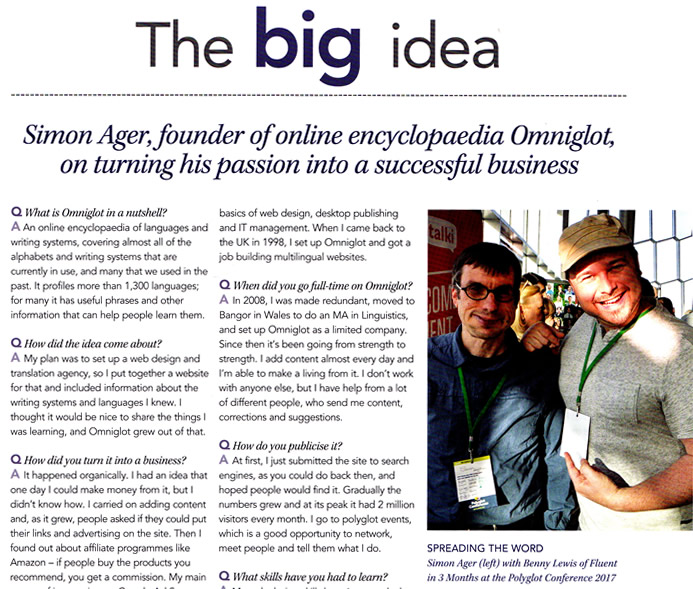 I talk about Omniglot – what it is, how it came to be, how I make a living from it, and my own language background.

I’ve been wondering whether to join the CIOL – I would qualify for membership, I think. Are any of you members or this, or other professional organisations for linguists? Is it worth joining?

In other news, this week I was interviewed, in French, for a podcast by Céline Guerreiro. I’ll let you know when that is online. We talked about language learning, mainly.

Recently I got talking to a Czech woman, who told me that she spoke Czech to her sons for the first year or so, while her husband spoke English to them – he doesn’t know much Czech. After that however, she switched to English, as she found it too hard to speak Czech to them all the time. This surprised me, as you’d think that speaking your mother tongue would be easier than speaking another language, but not in this case, it seems.

As they currently live in Wales, the main languages her boys encounter are English and Welsh. Maybe their mother is the only Czech speaker around – I certainly haven’t come across any others. Maybe she feels more comfortable speaking English than Czech after living here for many years.

She told me that they’re soon moving to Czechia, so her sons will have to learn Czech. They’re young (4 and 2), so will probably soon pick it up. Whether her husband learns it is another matter – it is quite a challenging language to learn as an adult.

Are any of you raising your children bilingually?

What challenges do you face, and how do you deal with them?

Have you become more comfortable speaking a foreign language than your mother tongue?

In bilingual communities it is common to switch between languages regularly. This certainly happens a lot among the Welsh speakers I know and hear every day.

Some conversations are mostly in Welsh with occasionally bits of English every so often, some are mainly in English with some bits of Welsh, and some regularly weave between Welsh and English.

According to a friend, it might not be so common for Catalan speakers to mix Catalan and Spanish. He is learning Spanish, and also knows a bit Catalan, and plans to learn more. He believes that Catalan speakers either speak one or the other, and don’t usually mix them in one conversation. So if he went to Barcelona and spoke the little Catalan he knows mixed with Spanish, people might find this strange. Is he correct?

According to the Urban Dictionary, Catañol is the mixture of Catalán and Español that people in Catalán-speaking areas of Spain often use to converse.

According to the Wikipedia, Catañol is spoken in Barcelona, especially by young people, and is a form of Spanish with Catalan influences. It emergered during the 20th century as a result of migration to Catalonia from other parts of Spain. It is apparently considered ‘vulgar’.

Are there any bilingual or multilingual communities where language mixing is rare or even stigmatised? I spent the past few days with my sister and her family. Her son is just over 2 and a half years old and is speaking a lot more than the last time I saw him at Easter this year.

He has trouble pronouncing certain sounds, such as r and consonant clusters like st, but at long as you listen carefully, you can usually work out what he’s saying.

He also invents new words, or gives words new meanings. For example, he has several toy monkeys (see below), and calls one ‘monkey’ or ‘daddy monkey’, another ‘other monkey’ or ‘mummy monkey’, and a smaller one he calls monkeykey, which I thought was very cute. He also calls playing cards, dominoes and other parts of games current buns. I’m not sure why.

Up-date: it turns out that I misheard the name of the monkey – it’s actually Monkey Keith not monkeykey. 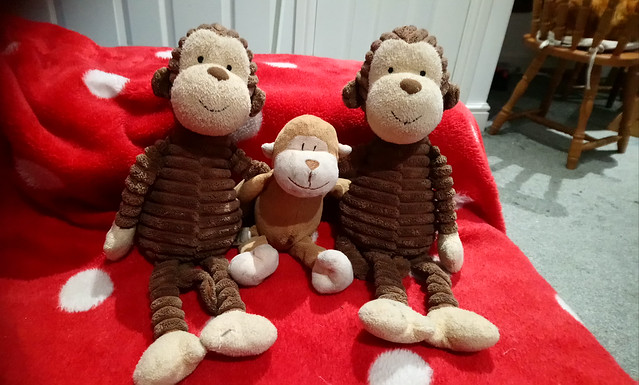 I spent Christmas at my brother’s house and had a nice time. It was interesting to see how the language skills of my niece (4) and my nephew (1) are developing.

My nephew is at the one-word stage. He can say quite a few individual words in English, and sometimes puts them together into short sentences. He also understands Russian, but I haven’t heard say any words in Russian.

Yesterday I spent the morning hunting for interesting language books with Lindsay Dow, of Lindsay Does Languages, Benny Lewis, of Fluent in 3 months, Steve Kaufmann, of lingq, and Josh Koehn from California.

The first book shop we went to had a good selection of books in and about a wide variety of languages, including Old Irish, Middle Welsh, Breton and Sanskrit. I resisted buying anything as I have no spare space in my bag, and already have plenty of language-related books at home.

After wandering around Vieux Montréal for a while we had lunch in a nice café, then Lindsay and I went to meet Moti Lieberman of The Ling Space, where there are videos which explain and discuss linguistic and language-related topics in an accessible way. I hadn’t heard of this site before, but will definitely have a look at some of the videos. It sounds very interesting.

In the evening we met up with Kris Broholm of Actual Fluency, Oli Richards of I will teach you a language, and some local friends of theirs for dinner in a vegetarian place on Rue Saint-Denis.

I’m taking it easy this morning, and after lunch will head to the airport – my plane leaves at 16:45, and I’ll arrive in Manchester at 07:50 tomorrow morning, as long as my flight from Paris isn’t affected by the planned strike by Air France staff.

I’m currently at the Polyglot Gathering in Berlin. I arrived here on Wednesday evening and have been speaking and hearing lots of different languages. So far I’ve had conversations in English, French, Welsh, German, Irish and Mandarin, and spoken bits and pieces of Spanish, Italian, Russian, Czech, Portuguese, Toki Pona and Esperanto. I’ve also heard some Finnish, Punjabi, Korean, Japanese, Polish, Slovak, Sardinian, Dutch, Hebrew, Indonesian, Norwegian, Swedish and other languages that I didn’t recognise.

Yesterday I went to talks on Portuguese Creole languages, Greek, language learning and linguistics, how to achieve advanced language competence, and on connections between cartoons and language learning. This morning I’ve been to talks on teaching multiple languages simultaneously, and languages and dialects of Sardinia. All the talks I’ve been to so far have been in English, apart from the Sardinian one, which was in Italian.

I’ve met lots of people I know from previous polyglot events, and lots of new people too. I might try to explore a bit more of Berlin at some point as well.