A Wanderwort is term used in linguistics to refer to a word that has spread to many different languages, often via trade. It was borrowed from German and comes from wandern (to wander) and Wort (word), so it’s a “wandering word”. The plural is Wanderwörter, Wanderworte or Wanderworts [source]. The origins of some such words goes back to ancient trade routes from the Bronze Age, and it can be difficult to trace which language they ultimately came from. Examples include copper, silver, mint and wine [source].

Another example of a Wanderwort is:

tea, which comes from the Dutch thee (tea), from 茶 (tê – tea) in the Amoy dialect of Southern Min (Min Nan), from the Old Chinese *l’aː (bitter plant), from the Proto-Sino-Tibetan *s-la (leaf, tea) [source].

There are similar words for tea in many other languages, including ᑎᕀ (tiy) in Cree, tae in Irish, tī in Maori and టీ (ṭī) in Telugu. These words arrived in Europe and elsewhere thanks to the Dutch East India Company, who brought tea by sea from Amoy [source].

The word chai which in English is short for masala chai, refers to a beverage made with black teas, steamed milk and sweet spices, based loosely on Indian recipes. It comes from from the Hindi-Urdu चाय / چائے‎ (cāy – tea), from the Persian چای‎ (čây – tea), from the Chinese 茶 (chá – tea) [source].

Languages that got their tea overland generally have a word for tea like chai or cha, including цай / ᠴᠠᠢ (tsay – tea) in Mongolian, चाय (cāy – tea) in Hindi, чай (čaj – tea) in Russian, ชา (chaa – tea) in Thai, and ca (tea) in Malay [source].

Yesterday I added a page about the Moose Cree language to Omniglot. Moose Cree (ᐃᓕᓖᒧᐧᐃᓐ / ililîmowin) is a Central Algonquin language spoken mainly in the town of Moose Factory on Moose Factory Island on the Moose River in Ontario, Canada. That’s a lot of moose, or is it mooses, moosen or even meese? (see below) 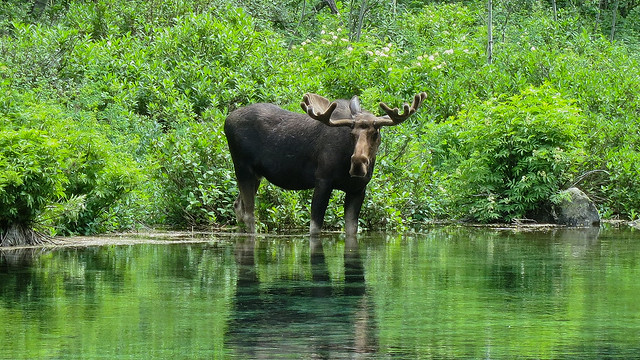 “a ruminant mammal (Alces alces) with humped shoulders, long legs, and broadly palmated antlers that is the largest existing member of the deer family and inhabits forested areas of Canada, the northern U.S., Europe, and Asia” [source]

A moose can also be “a member of a major benevolent and fraternal order [Loyal Order of Moose]”.

The word moose was discussed in a previous post, along with the word elk and related words.

Moose was first used in writing in English in 1603, and is thought to come from an Eastern Algonquian language such as Massachusett (moos), Narragansett (moos) or Penobscot (mos), from the Proto-Algonquian *môswa (it strips), referring to how a moose strips tree bark when feeding [source].

The standard plural of moose is moose, although mooses and meese are also used informally. I think a good alternative plural would be moosen, like oxen, children and aurochsen. What do you think?

In Moose Cree there are quite a few words moose-related words, including:

Source: The Dictionary of Moose Cree

There are also plenty of moose-related words in Plains Cree:

While there are pages about Massachusett (Wôpanâôtuwâôk) and Narragansett (Nãikanset) on Omniglot, there isn’t one about Penobscot (Pαnawάhpskewi), which is a variety of Eastern Abenaki that was spoken mainly in Maine in the USA until the 1990s, and which is currently being revived. I’ll be adding details soon.

There is an online Penobscot Dictionary which includes quite a few moose-related words.

Update: there is now a page about Penobscot on Omniglot.