After arriving in Ljubljana yesterday I found a bus into the city centre, then walked to the AirBnB I’m staying in, which is more or less in the centre of the old town. It doesn’t look like much from outside – the door is covered in graffiti, and the outside of the building is rather plain, but inside the flat I’m in is very nicely decorated. 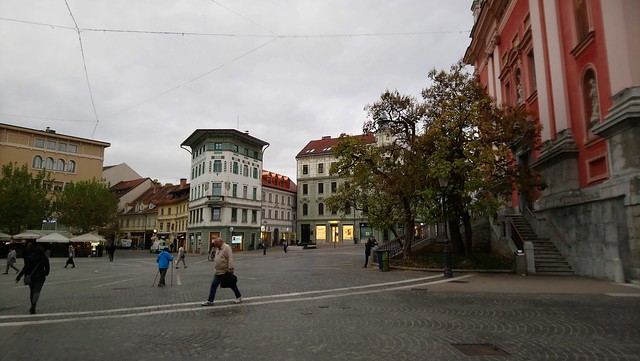 Last night I had dinner at a restaurant by the Ljubljanica, the river that flows through Ljubljana. I saw quite a few people I know from previous polyglot events going past, and met some of them afterwards in a tapas restaurant.

So far I’ve spoken a little Slovenian, quite a bit of German, French and Welsh, and odd bits of other languages.

We spent today talking about the best ways to learn languages. This was interesting and there was some useful advice that I might try.

I haven’t had a lot of time to explore the city yet. The centre is quite compact and mostly pedestranised, with lots of interesting and colourful buildings.

This evening there was a concert with songs in many languages, then I went for dinner with quite a few other polyglots.