The Batak script, or surat Batak, is sometimes used to write the Batak languages, which are spoken in the north of Sumatra in Indonesia. Traditionally the Batak script was only used by datu (priests), and they used it to write magical texts and calendars.

Batak is thought to be a descendent of the Pallava and Old Kawi scripts, which ultimately were derived from the Brahmi script of ancient India. Or it might be a descendent of a hypothetical Proto-Sumatran script, with Pallava influences.

After Europeans - first German missionaries, then the Dutch - began visiting Batak-speaking areas from 1878 the Batak script was taught in schools, along with the Roman alphabet, and teaching and religious material was published in the script.

Not long after the First World War missionaries decided to stop using the Batak script in books. Since then the script has been used mainly for decoration purposes.

There are slight variations in the letters and vowel diacritics used to write each language.

Karo Batak is a Malayo-Polynesian language with about 600,000 spoken in the central and northern part of the Indonesian island of Sumatra.

Dairi Batak, which is also known as Batak Toba, Batta or Hata Batak Toba is a Malayo-Polynesian language spoken by about 2 million people in the northern part of the Indonesian island of Sumatra.

Dairi Batak, which is also known as Dairi, Pakpak and Pakpak Dairi, is a Malayo-Polynesian language with about 1.2 million speakers in the northern part of the Indonesian island of Sumatra.

Simalungun or Batak Simalung is a Malayo-Polynesian language spoken by about 1.2 million people in the northern part of the Indonesian island of Sumatra.

Tower of Babel in Simalung

Mandaling Batak or Batta is a Malayo-Polynesian language with about 400,000 speakers in the northern part of the Indonesian island of Sumatra.

The fonts used on this page were created by Dr Uli Kozok of The University of Hawai'i at Manoa. 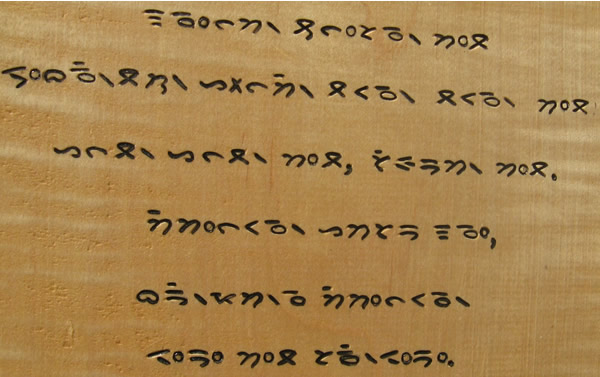 These are our words, shaped
By our hands, our tools,
Our history. Lose them
And we lose ourselves.

Translation and transliteration by Dr Mangantar Napitupulu. Carving and English text by Tim Brookes of endangeredalphabets.com

Other languages written with the Latin alphabet