In 1260 Kublai Khan commissioned Drogön Chögyal Phagpa (འགྲོ་མགོན་ཆོས་རྒྱལ་འཕགས་པ་), a Tibetan monk and State Preceptor of the Yuan Dynasty, to create a new national script to replace the Uighur-based script. An edict was issued in 1269 requiring the use of the new script in all official documents, along with the local scripts as appropriate.

The old Mongolian script was thought unsuitable because it was borrowed from the Uighurs rather than being a unique Mongol creation; and because it didn't do a very good job of representing the sounds of Mongolian, let only other languages such as Chinese. It is probable that Kublai Khan hoped that the new script would be used to write all the languages spoken within his empire, and he ordered the establishment of schools to teach the new script.

The script was originally called "Mongolian new letters" - 蒙古新字 (měnggǔ xīnzì) in Chinese, a name still used in Tibetan. However the script is now known as dörbelǰin üsüg, square script, in Mongolian and as 八思巴字 (bāsībā zì), Phags-pa letters, in Chinese. In English the script is referred to as the Mongolian Quadratic Script, or more commonly, the Phags-pa scipt, a name with many variant spellings.

The Phags-pa script did not prove popular with Mongolian and Chinese officials, who used the new script only to a limited extent and reluctantly. The many edicts prohibiting use of the older Mongolian script had little effect. Usage of the script among private individuals was even more limited. The Chinese abandoned the script completely after the Yuan Dynasty collapsed in 1368, while the Mongols reverted to their Uighur-based script.

The most recent example of Phags-pa writing in Mongolian dates from 1352, though there are some later examples in Chinese. However the script is still used occasionally in Tibetan for decorative purposes on seals and temple inscriptions. It is also used to write some business names in Mongolia. 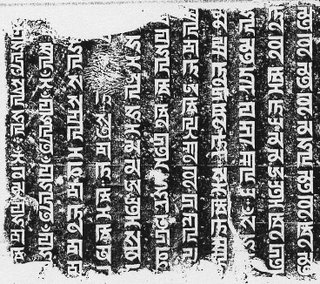 Part of the 1345 Phags-pa Sanskrit inscription at Juyongguan