I arrived safely in Glencolmbcille (Gleann Cholm Cille) on Saturday night. As we went further west the skies got darker, and when we arrived in Donegal the heavens opened, and it rained almost non-stop until this morning. I don’t come here for the fine weather, but this was a bit extreme, even for this part of the world. Today the sky cleared for a while, and the sun even put in a welcome appearance.

Irish language classes started yesterday afternoon, and the cultural workshops started this afternoon. I’m doing the sean-nós singing, as usual, and am enjoying it, and the Irish classes very much.

There are plenty of people here who I know from previous visits, and quite a few new faces as well. So far I spoken a lot of Irish, and bits of French, Breton, Swedish, German and Czech – people come here from all over the world, so it’s a great place to practise languages.

Last night we were treated to some excellent music and poetry from Bríd Harper and Diarmuid Johnson. Here they are playing some Welsh tunes. Tonight there is some more poetry, this time from Áine Ni Ghlinn.

Yesterday I learnt some Scottish step dancing with Joy Dunlop in the morning, which was a lot of fun and quite tiring, then in the afternoon there were performances from Cornish and Breton groups. 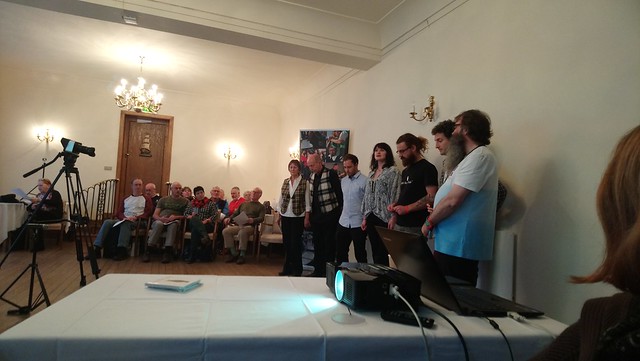 I also went to a Cornish shanty session with the Aggie Boys Choir, Tir Ha Tavas and Matt Blewett, and a Cornish tunes session hosted by Richard Trethewey of The Grenaways and The Rowan Tree. I didn’t know any of the tunes, but did my best to pick up bits of them. I also recorded some, and may try to learn them and introduce them to sessions in North Wales. 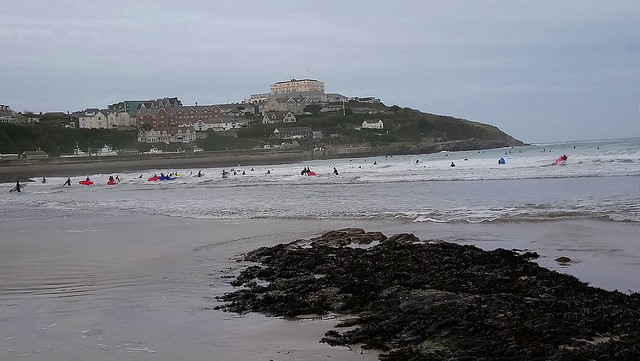 This morning I had another explore of Newquay and went down to Towan Beach, which seems to be very popular with surfers. Later today there will be more workshops in dancing and singing, readings of poetry and stories in Cornish, and more performances and dances.

This week I have been speaking quite a bit of Irish. Even though I rarely speak it at home, it is usually there when I need it. When trying to understand songs or poems in Irish, I realise that there are plenty of gaps in my vocabulary, but I can at least get the gist of them.

On Monday night there was a little Russian-speaking corner in the pub made up of three Belarusians, a Bulgarian, and me. I was able to understand quite a bit of what the others were saying in Russian, and to join in occasionally.

Yesterday I learnt a bit about Finnish language and culture from the Finnish guy who is doing the harp course. He told me that Finns tend to be less talkative than people from other countries, but that there is a lot of non-verbal communication between them.

I have also had opportunities to speak a bit of German, and have learnt a bit about German musical terms. For example, in German musical notes are not A to G, but A to H – H refers to B, and B refers to B♭, which is slighly confusing to someone used to the English system.

Do musical notes have other names in your language, or in other languages you know?

I went to a poetry recital last night featuring Nia Davies, a Welsh/English poet who lives in Wales, and Hu Dong, a Chinese poet who lives in England. It was part of the North Wales International Poetry Festival. Nia’s poems were all in English, and Hu Dong’s were in Sichuanese, with English and Welsh translations.

Nia read a series of interesting poems based on really long words in various languages, or at least on their English definitions. She was inspired to write the first of these after discovering the Turkish word Çekoslavakyalılaştıramadıklarımızdansınız? (Are you one we couldn’t Czechoslavakianize?) while learning Turkish. She then looked for similarly long words in other languages, and wrote poems about some of them.

While listening to the long word-based poems I was trying to think up with a suitably long word to describe such activity. I came up with sesquipedalogology, which combines sesquipedalian ([of a word] polysyllabic; long; characterized by long words; long-winded), and logology (originally the science of word studies, but now the field of recreational linguistics, particularly word games).

Another interesting word that came up was metrophobia, the fear of poetry, which was the theme of one of the poems.

The English translations of long words in other languages can be quite poetic – a kind of found poetry. In fact you can take definitions from any monolingual dictionary and find poetry in them. Here are few from my English dicitonary:

elflock, n.
a lock of hair
fancifully regarded as having been
tangled by the elves

If you have a monolingual dictionary to hand, why not open it at random and see if you can find any interesting words and definitions.

I’m having a wonderful time in Gleann Cholm Cille learning to play the harp and speaking plenty of Irish. The course is going really well – we started with basic techniques, and have learnt a number of tunes, including some from the Bóroimhe / Brian Boru suite by Michael Rooney.

I’ve videoed our teacher, Oisín Morrison, playing all the pieces we’ve learnt so far, and he’s going to give us some more pieces to learn at home.

People come here from all over the world on holiday and to do courses at Oideas Gael – this week you can do Irish language classes, harp playing, or hill walking – so there are opportunities to speak quite a few languages, including French, German, Swedish, Mandarin, Dutch and Scottish Gaelic. I’ve even learnt a bit of Serbian from a Bosnian woman who is studying Irish here.

Yesterday evening there was a book launch for two new books – a book of poetry in English and Gaelic by Meg Bateman, a lecturer at Sabhal Mòr Ostaig, and a sci-fi novel by Tim Armstrong, a researcher at the college. They read bits from their books and answered questions about the books and about the writing process. Nibbles and drinks were also provided. I bought Tim’s novel.

After that we went to the Hotel Eilean Iarmain to sing and plays some tunes. There was a wedding party there from Colorado who were very lively, and we sang a few songs with them at the end of the evening.

This is a little ditty I came up with recently and which incorporates the old sheep scoring numbers and a bit about their history. I first discovered these numbers in a book about Cumbrian dialect in Lancaster library one day many years ago while I was waiting for my train home from school. The numbers I use here come from Keswick in Cumbria. There are many other versions from all over England, Wales and Scotland.

When you get to jiggit

A long time ago in a land not so far away
The shepherds did count their sheep in this way
And the children did use these numbers in their play
And this is what they’d say.

The last remaining fragments of long-forgotten Celtic tongues
That’s what they’re thought to be.
Collected mainly during the 19th century
In many parts of the north country.
And they go …

I sang this in public for the first time last night at Poetica, an evening of poetry and music at the Blue Sky Café in Bangor, and it went down well.

On Sunday I attended an evening of multilingual poetry in Bangor that feature poets from Wales and India who read poems in Welsh, English, Bengali, Malayalam and Manipuri. It was part of a project to build links between Wales and India which involved the Welsh poets translating poems by the Indian poets into Welsh, and vice versa. They also translated their poems into English. A similar event will be taking place in Ultracomida in Aberystwyth tomorrow.

I could understand the poems in Welsh quite well, and while I didn’t understand any of the poems in the languages of India, it was fascinating just to hear these three very different languages, each of which belongs to a different language family – Bengali is Indo-Aryan, Malayalam is Dravidian and Manipuri is Tibeto-Burman. Unfortunately I didn’t get any recordings of them so I can’t share them with you.

Understanding poetry in foreign languages can be quite challenging, even if you speak them well. Poetic language can differ from every day language in various ways, but I find it worth the effort to try to read and appreciate poems in their original languages rather than just relying on translations.

I’ve written a short, simple poem about the importance of preserving endangered languages in their spoken and written forms. It goes like this:

These are our words, shaped
By our hands, our tools,
Our history. Lose them
And we lose ourselves.

If it makes the translation easier, it could also be written like this:

These are our words, shaped
By our hands, our tools,
Our history. If we lose our words,
We lose ourselves.

I would like to get this poem translated, with your help, into as many endangered languages–in their original scripts–as possible.

I’m hoping that you may be able to translate the poem into any of the world’s minority or endangered writing systems, or, failing that, pass the poem on to someone who can.

I don’t have an urgent deadline. If I could get the first of these translations within a few weeks, I can start working-and if it takes two or three months for them all to trickle in, that’s fine.

Once I have the translations, I’d like to create two pieces of work with them-two different versions of the project.

For one of these versions, I’ll pass the text along to Bob Holman, who has won a substantial grant to have poems projected onto the sides of large buildings in New York. He’s very interested in projecting poems in endangered languages and endangered alphabets.

The other version will be another major carving project. I plan to build a sculpture that consists of four tall pieces of beautiful maple wood, each facing toward a different point of the compass. Each face of the sculpture will display the poem in two, three or four endangered alphabets, depending how many I’m able to collect. This sculpture will then go on permanent exhibition in a major public building in the United States.

I hope very much you’re as interested in this project as I am. If you have questions, please don’t hesitate to ask.

For more information on the Endangered Alphabets, please visit http://www.endangeredalphabets.com.