The name Ogham is pronounced [ˈoːm] or [ˈoːəm] in Modern Irish, and it was spelt ogam and pronounced [ˈɔɣam] in Old Irish. Its origins are uncertain: it might be named after the Irish god Ogma, or after the Irish phrase og-úaim (point-seam), which refers to the seam made by the point of a sharp weapon. Ogham is also known as or ogham craobh (tree ogham) beth luis fearn or beth luis nion, after the first few letters.

Ogham probably pre-dates the earliest inscriptions - some scholars believe it dates back to the 1st century AD - as the language used shows pre-4th century elements. It is thought to have been modelled on or inspired by the Roman, Greek or Runic scripts. It was designed to write Primitive Irish and was possibly intended as a secret form of communication.

While all surviving Ogham inscriptions are on stone, it was probably more commonly inscribed on sticks, stakes and trees. Inscriptions are mostly people's names and were probably used to mark ownership, territories and graves. Some inscriptions in primitive Irish and Pictish have not been deciphered, there are also a number of bilingual inscriptions in Ogham and Latin, and Ogham and Old Norse written with the Runic alphabet.

The letters are shown in their vertical and horizontal variants. The pronunciation is for Primitive Irish, the language used in the majority of Ogham inscriptions. The names and sounds represented by the letters uath and straif are uncertain. There are many different version of the letter names - the standard ones are used here [with the Primitive Irish ones, where known, in bracketts] - others can be found at: evertype.com.

The Sons of Lugudeca, Son of Cunea

Ogham stone found on Fardel Farm at Cornwood in Devon, and donated to the British Museum in 1861 (photo by Simon Ager). 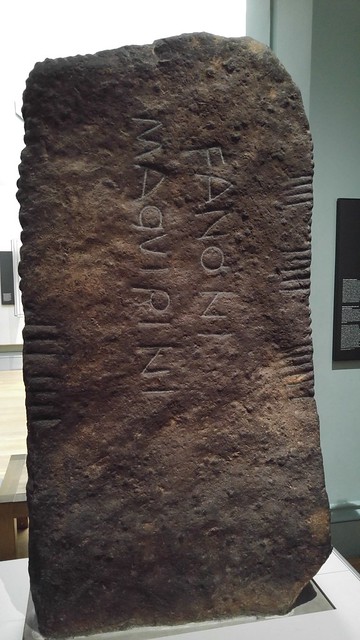 Photos of Ogham stones with transliterations of the inscriptions
http://titus.uni-frankfurt.de/ogam/ogsing.htm