Oscan was an Italic language spoken in southern Italy between about the 5th and 1st centuries BC. It was spoken by the Samnites, Aurunci (Ausones) and the Sidicini in the in Samnium, Campania, Lucania and Abruzzo. After the territory occupied by the Oscans was conquered by Rome in the first century AD, the Oscan language and culture disappeared.

Oscan was related to Latin and Umbrian, and is known from a number of inscriptions. It was written with the Latin and Greek alphabets, and with its own alphabet, which was adapted from the Etruscan alphabet sometime in the 7th century BC.

A terracotta marker with an Oscan inscription and stamps showing a helmeted Athena and a boar. This marker was found in a tomb near Capua in Italy and dates from 300-250 BC. The inscription reads "VIRIIUM VESULLIA[IS] DEIVIN[AIS], 'of the Virrii family for the divine festival of the Vesulias'. Such stamps appear on currency, and may devote gifts of money by the Virri family. 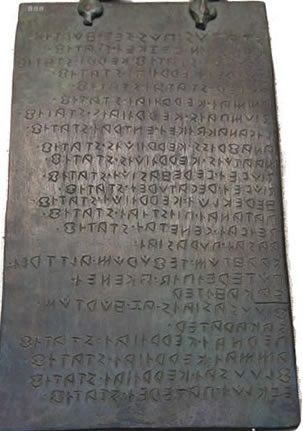 This bronze tablet with an Oscan inscription dates from 300-100 BC and is thought to be from Agnone or Capracotta. The inscription is about the dedication of statues of various deities.

Photos by Simon Ager, taken in the British Museum.