Messapic or Messapian is an extinct language that was spoken in the south east of Italy in what is now Apulia between about the 6th and 1st centuries BC. It was spoken by the Messapians, Peucetians and Daunians and may have been related to the Illyrian language. It became extinct after the region was conquered by Rome and the population was assimilated.

Messapic is know from abou 300 inscriptions, only some of which have been deciphered. The Messapic alphabet is thought to have derived directly from the Greek alphabet, rather than developing from the Etruscan alphabet. 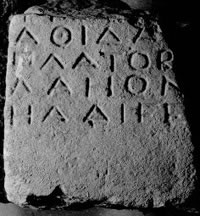