Anglo-Saxon runes are an extended version of Elder Futhark consisting of between 26 and 33 letters. It is thought that they were used to write Old English / Anglo-Saxon and Old Frisian from about the 5th century AD. They were used in England until the 10th or 11th centuries, though after the 9th century they were mainly used in manuscripts and were of interest to antiquarians, and their use ceased after the Norman conquest in 1066. 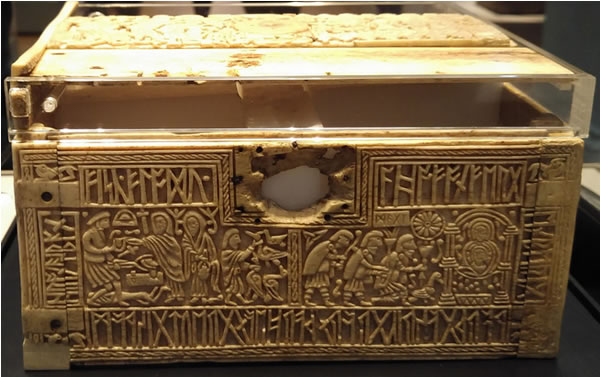 The fish beat up the sea(s) on to the mountainous cliff
The king of (?)terror became sad when he swam onto the grit.
Whale's bone

The inscription is a riddle with the answer whale's bone, which is what the casket is made of.

From the Franks Casket. Photo by Simon Ager, taken in the British Museum.

Convert English in the Latin alphabet to Anglo-Saxon Runes
http://futhorc.com/runic.asp