Words for hammer and related things in Celtic languages: 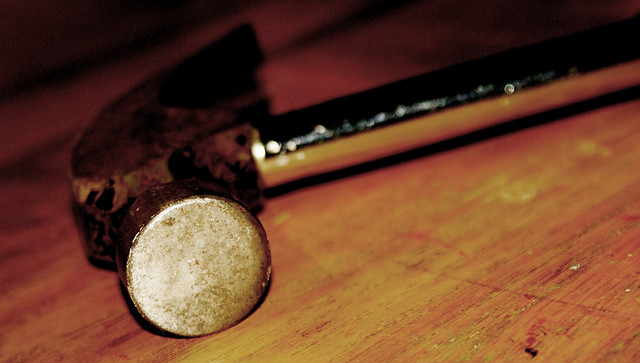 Etymology: possibly from the Proto-Indo-European *h₃erg-dʰh₁o-, from *h₃erg- (to perish) and *dʰeh₁- (to do) [source].

Ordovīcēs is the Latin name for a Celtic tribe who lived in what is now North Wales (where I live) and nearby parts of England. In Common Brittonic there were known as *Ordowīcī. The Ordovician geological period (c. 485 – 443 million years ago) is named after them as rocks associated with that period were first found in their former territory by Charles Lapworth in 1879 [source].

Etymology: from the Anglo-Norman cassur, from the Latin quassō (I shake, quake, wave, flourish), from quatiō (I shake, agitate), from the Proto-Indo-European *kʷeh₁t- (to shake) [source].

Words from the same Latin roots include quash (to suppress, crush) in English, casser (to break) in French, and cascar (to crack, split, hit) in Spanish [source].

Etymology: from the British Latin *mortulus, from the Latin martulus (hammer), from marculus (small hammer), possibly from the Proto-Indo-European *melh₂tlo-, from *melh₂- (to grind) [source].