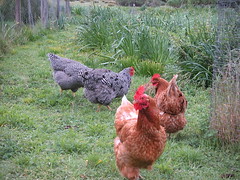 What is the connection between singing and hens?

Hens don’t sing, but the words for to sing / speak in Celtic languages come from the same root as the English words hen and chant.

The root is the Proto-Indo-European *keh₂n- (to sing) [source].

This became *kan- (to sing) in Proto-Celtic, which became canaid (to sing) in Old Irish, and can (to chant, sing, speak, talk) in modern Irish. In Scottish Gaelic it became can (to sing, rehearse, say, name or call), and in Manx it became caayn (to bray, whine; song).

In Proto-Brythonic it became *kėnɨd (to sing), which became canam (to sing) in Old Welsh, canu (to sing, intone, chant, state, say) in modern Welsh, kana (to sing) in Cornish, canaff (to sing) in Middle Breton and kanañ (to sing) in Breton [source].

*keh₂n- is also the root of the Latin canō (I sing), from which words for to sing in Romance language developed, such as chanter (to sing) in French and cantar (to sing) in Spanish [source], and the English word chant [source].