Today we’re exploring the origins of the word puffin. 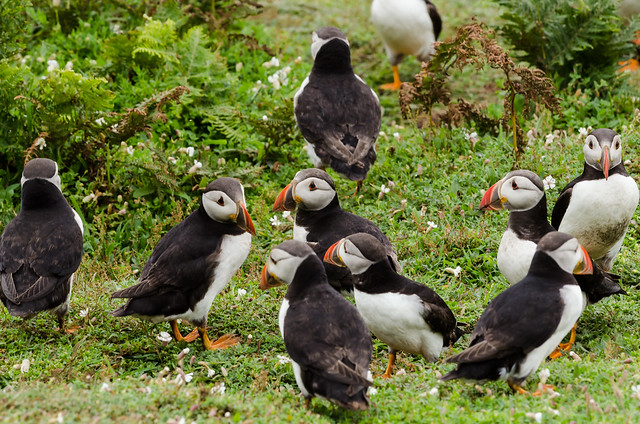 It comes from the Middle English poffon / poffin / puffon (puffin and other sea-birds of the family Alcidae), perhaps from puf(f), from the Old English pyf (a blast of wind) – of imitative origin. Or it possibly comes from Anglo-Norman or Cornish [source].

The word puffin first appeared in English in the 14th century, and originally referred to the cured meat of young Manx shearwaters (Puffinus puffinus), which were originally known as the Manks puffin. Atlantic puffins acquired the name puffin in the 19th century, possibly due to similar nesting habits [source].

In French the word puffin [py.fɛ̃] refers to the shearwater, and was borrowed from English [source]. A puffin is a perroquet de mer (“sea parrot”) or macareux in French – not to be confused with maquereau (mackerel) [source].

The Latin name from the puffin Fratercula, comes from Medieval Latin and means “friar” or “little brother”, from the Latin frater (brother, friend, lover, sibling) and is a reference to their black and white plumage, which apparently looks like a monk’s robes [source].

Puffins are also known as sea-parrots, popes, sea clowns, clowns of the sea, tomnoddies, tammie norries, little brothers of the north, and various other things. Young puffins are known as pufflings, puffins live in puffinries, and a group of puffins is a circus or colony (on land), a wheel (when flying) or a raft (on water).

In Iceland, where puffins are common, shops that sell souvenirs, many of which are puffin-themed, are known as “puffin shops”, or lundabúðir in Icelandic [source].

Here’s a lovely little song about puffins written by Malinda Kathleen Reese in collaboration with her followers: