Have you ever wonder why the names of the Gauls in the Asterix books all end in -ix? 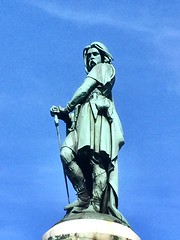 There were genuine Gauls with names ending in -ix, or rather rix, which means king in Gaulish. They include Vercingetorix (see photo), Dumnorix, Albiorix, Adgennorix and Dagorix [source]. Asterix and friends have joke names with the -ix suffix to make them sound Gaulish.

The Welsh one is in fact rarely used – the usual Welsh word for king is brenin, which comes from the Proto-Celtic *brigantīnos ((someone) pre-eminent, outstanding), from the Proto-Indo-European *bʰerǵʰ- (to rise, high, lofty, hill, mountain) [source], which is also the root of such English words as barrow, burrow, bury, borough, burgher and fort [source].

Words for realm or kingdom in Germanic languages come from this root, including Reich (empire, realm) in German, rike (realm, kingdom, empire, nation) in Swedish, and rik (realm, kingdom) and kinrick / kin(g)rik (kingdom) in Scots.

We also get the English suffix -ric from this root – as in bishopric (a diocese or region of a church which a bishop governs), and in the obsolete English word for kingdom – kingric, which means “king king” [source].

The words for king in the Romance languages also come from *h₃rḗǵs, via the Latin rēx (king, ruler) [source].

3 thoughts on “Asterix and the King”