Here’s the latest news from the world of Omniglot.

This week we have a new page about General Chinese (Tungdzih) a way to write all major varieties of Chinese with the Roman alphabet, or using Chinese characters syllabically. It was invented by 趙元任 (Zhào Yuánrèn) in the early 20th century, and he also invented Gwoyeu Romatzyh (国语罗马字), which a way to write Mandarin Chinese with the Roman alphabet using tone spelling. It’s sometimes used in Taiwan.

There’s a new constructed script called Kacheritopu, which was invented by Johan Sommansson. It’s not intended for any language in particular, and is loosely based on the Devanagari alphabet. 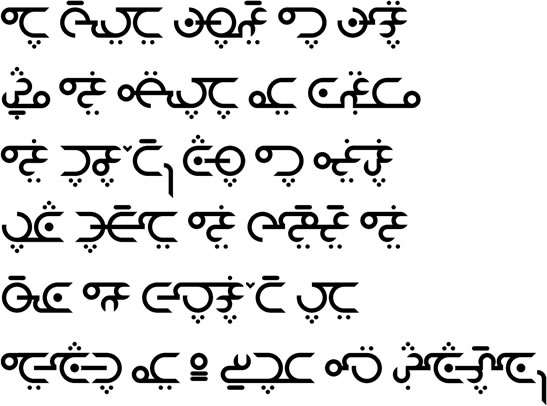 There are new language pages about:

There are new numbers pages in:

I’ve was kind of Feverish earlier this week, so wrote an Omniglot blog post about it, and there’s the usual Language Quiz. See if you can guess what language this is:

Here’s a clue: this language is spoken in Brazil and Venezuela.

The mystery language in last week’s language quiz was Chuvash (Чӑваш чӗлхи), a Bolgar Turkic language spoken in the Chuvash Republic in the west of the Russian Federation.

There’s a new Celtiadur post are about words for Trembling and related things in Celtic languages.

There’s an episode of the Celtic Pathways podcast about words for Family and related things.

In the Adventure in Etymology we find out what links the word Fever with words for day, flame and to singe in English, Irish and Welsh.

I also made improvements to the Archi language page.

In other news, on a trip to Aberystwyth last weekend I picked up a dose of corona virus and haven’t been feeling great this week. The friend I went to see in Aberystwyth wasn’t well then, and later found out she had corona. On Thursday I tested myself and found out I had it too. I’m feeling better now, but still haven’t completely recovered.