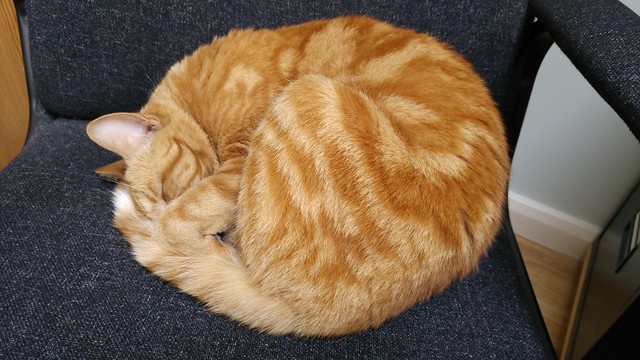 Snoozle is a Scots word that means to snooze or doze, or to nuzzle, poke with the nose or snuggle [source].

The last example comes from Miss PunnyPennie on TikTok, who inspired this post. You can hear how it at:

It’s a blend of snooze and nuzzle and is found in some English dialects, where it means to nuzzle affectionately [source].

A snooze is a brief period of sleep or a nap, and as a verb it means to sleep, especially briefly; to nap or doze; or to pause or postpone for a short while. It’s origins are unknown [source].

Nuzzle means to touch someone or something with the nose, or to bring the nose to the ground, to burrow with the nose, or thrust the nose into [source]. It comes from the Middle English noselyng (face-downward, on the nose, in a prostrate position), from nose (nose, beak) and -lyng (a suffix denoting direction, state or position) [source].

There’s something about the combination of letters in snoozle that appeals to me, especially the sn and the oo.

Some other Scots words beginning with snoo include:

Are there words in other languages that have similar meanings?

One I can think of is the Welsh/Wenglish word cwtsh/cwtch [kʊtʃ], which means a hug, cuddle, cubbyhole or little corner. It comes from the Middle English couche [ˈkuːtʃ(ə)] (bed), from the Old French couche (bed, lair), from couch(i)er (to lay down, place; go to bed, put to bed), from the Latin collocō (I place, put, settle) [source].