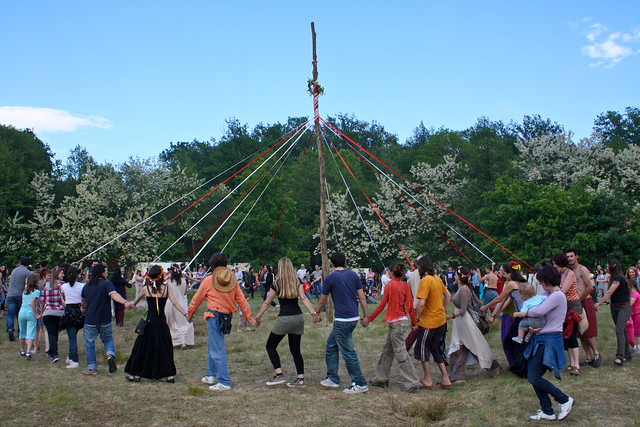 Today is the first day of the month of May, or May Day, when spring festivals are traditionally held in many countries. It is also International Workers’ Day. Apparently the origins of the spring festivities go back at least to the Roman festival of Floralia, in honour of Flora, the Roman goddess of flowers (and magarine*). This was held from 27 April – 3 May during the Roman Republic era [source].

*Flora is a brand of margarine found in the UK, other parts of Europe, and Australia and New Zealand.

The word May came from the Old French mai (May), from the Latin māius (May) which was named after Maia, a Roman earth goddess [source].

Incidentally, the emergency call mayday mayday mayday! has nothing to do with May or May Day, but was in fact thought up in the 1920s by Frederick Stanley Mockford, who was officer-in-charge of radio at Croydon Airport in London. It is based on the French phrase m’aidez (help me) [source].

May Day is known as Calan Mai (1st day of May) or Calan Haf (1st day of summer) in Welsh. Traditionally celebratations would begin on the eve of Calan Haf, or Nos Galan Haf with bonfires, and the gathering of hawthorn and flowers to decorate houses. Celebrations on May Day itself might include dancing and singing [source].

I can’t find any examples of May carols (carolau mai / carolau haf), but here’s the Welsh band Calan:

May Day is known as Lá Bealtaine in Irish, Là Bealltainn in Scottish Gaelic and Laa Boaldyn in Manx, and the month of May is known as Bealtaine or mí na Bealtaine in Irish and Boaldyn in Manx. These all refer to the old Celtic festival of Beltane/Beltain, which is held on the 1st May and marks the beginning of summer when cattle would be traditionally driven to their summer pastures. Celebrations include lighting large bonfires and leaping over them, and/or walking and driving cattle between them [source]. 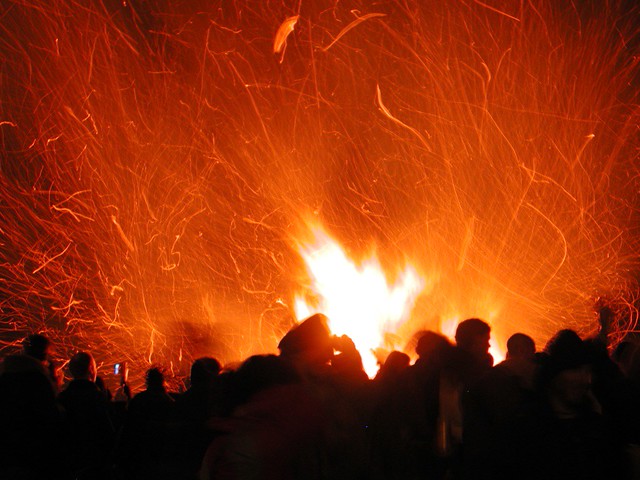