I’m currently studying several languages from the same family – Danish, Swedish, Dutch and Faroese, and I’ve been noticing some interesting similarities and differences in their vocabulary.

In Dutch, for example, lopen [ˈloːpən] means to walk or run – apparently it usually means to walk in the Netherlands, and to run in Belgium, according to Wikitionary.

These words all come from the Proto-Germanic root hlaupaną [ˈxlɑu̯.pɑ.nɑ̃] (to jump forward, to leap) from the Proto-Indo-European *klewb- (to spring, stumble) [source].

The English words leap and lope (to travel at an easy pace with long strides) come from the same root, as does the German word laufen (to go, walk, run, work, move), and related words in other Germanic languages [source].

In Swedish one word for to run is springa, which is cognate with the English word spring, the Dutch springen [ˈsprɪŋə(n)] (to blow, jump, leap, burst), the German springen [ˈʃpʁɪŋən] (to go, bounce, skip, spring, leap), and the Danish springe [ˈsbʁɛŋə] (to jump, leap, spring).

These come from the Proto-Germanic root springaną [ˈspriŋ.ɡɑ.nɑ̃] (to spring, jump up, burst, explode) [source].

The word gå [ɡoː] means to go, walk or stoll in Swedish. In Danish the same word, pronounced [ɡɔː/ɡ̊ɔːˀ], means to go or walk, and in Norwegian, where it’s pronounced [ɡɒː/ɡoː], it means to walk, go work, function, or be alright. In Faroese the equivalent is ganga [ˈkɛŋka], which means to walk. 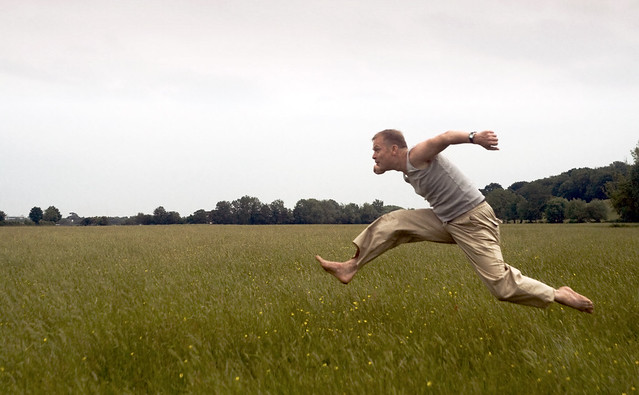