Innu is a member of the Central Cree branch of the Algonquian language family. It is spoken in the provinces of Newfoundland, Labrador and Quebec in eastern Canada. In Mashteuiastsh, a First Nation reserve in the Saguenay-Lac-Saint-Jean region of Quebec the majority of people speak Innu. The language is also spoken by many people in Schefferville and Lower North Shore, Quebec. In communities near cities younger people are shifting to French and English, while those of 65 generally speak Innu well. According to the 2016 census, there are 10,200 speakers of Innu.

Innu is also known as Montagnais, Montagnais Innu or Innu Aionun. The name Montagnais means "mountaineer" in French. Innu speakers call themselves Innu, and their language Innu or Innu-aimun. They are part of the same nation as the Naskapi, though their languages are distinct. Innu is closely related to Cree.

Innu was first written by missionaries in the 18th century. A prayer book and a primer in Innu were published by Father La Brosse in the 1770s. A number of ways to write the language were devised. Moves to create a standard spelling system for Innu began in the 1980s, and were finalized in 1997 at workshops organised by the Institut culturel et éducatif montagnais (ICEM). The standard orthography is based on the Eastern dialect, with variations allowed for other dialects.

Innu is taught as a subject in some schools, and used as a language of instruction in others. 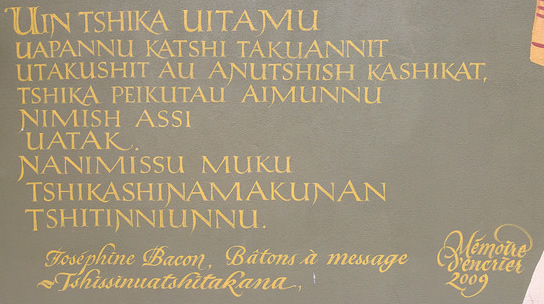 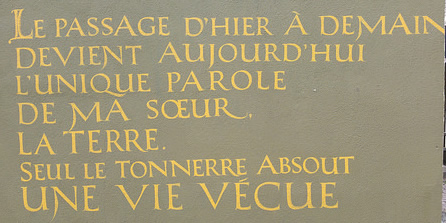 This is a poem by Joséphine Bacon entitled "Bâtons à message / Tshissinuatshitakana" which appears on a mural on a wall in Montreal.

Sample videos in and about Innu

Languages written with the Latin alphabet