Glencolumbcille is beautiful, quiet valley tucked away in the north west of Ireland. It's only about 170 miles (270km) from Dublin, but it takes quite a while to get there thanks to Ireland's narrow, winding roads. The journey to Glencolmcille takes you through some beautiful areas and the views as you drive along the coast are wonderful. As part of the Donegal Gaeltacht, Glencolumbcille is an area where Irish is an everyday language for many people.

In June 2005 I spent two weeks learning some more Irish at Oideas Gael, an Irish language and culture school in Glencolumbcille. This was my first trip to Ireland and my first chance to speak Irish to other people.

I stayed at a very comfortable bed & breakfast place and was able to practise my Irish with the owner, who was impressed that I'd managed so much in a fairly short time and on my own, as were the other people I met. 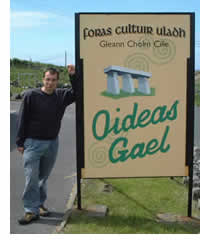 On the first day at the school we were put into different levels - I was in level 3, the top level. The teaching was almost entirely in Irish and I managed to follow most of it. Some of my fellow students were nearly fluent in Irish, while others had more of struggle to get the words out. I was somewhere in the middle.

Lessons were from 10am-1pm and 3pm-5pm each day, with various activities, such as dancing and singing, in the evenings. After which we usually ended up in Biddy's, one of the local pubs, where there were traditional music sessions every night.

My fellow students came from many countries, including Ireland, England, Wales, Germany, Denmark, Norway, the USA, Canada, Switzerland, Austria and New Zealand, so I had opportunities to practise some of my other languages, including German, French and Welsh.

The weather during my stay was warm but very changeable - sunny one moment, cloudy the next and there was quite a bit of rain. This is fairly typical weather for the west coast of Ireland.

The scenery in and around Glencolumcille is spectacular, the people I met there were very interesting and I'd like to go back there sometime in the not too distant future.

I did in fact return to Glencolmcille for a week in June 2006. Quite a few of the people I met in 2005 were there again - some have been going there every year for up to ten years - now that's dedication! This time there were fewer people - only seventeen (three in level one, two in level two and twelve in level three). The standard of Irish among us was higher than the previous year, when there were many beginners. Apart from a few Brits and Americans, the majority of the students were Irish, and many of them were teachers.

We had a different teacher, but the course was similar to the one in 2005, as were the extracurricular activities. There weren't as many sessions at Biddy's though. I felt a lot more confident about my Irish abilities and was able to speak the language with more fluency.

In June 2006 there was a festival of Gaelic music and culture featuring performers from Ireland, the Isle of Man and Scotland in Glencolmcille. Unfortunately I wasn't aware that this event was happening until I arrived, by which time it was almost over. I did manage to catch an excellent session featuring musicians and singers from all the Gaelic-speaking areas, and some psalm singing by groups from the Isle of Lewis and Glencolmcille. The group from Lewis sang their psalms in a very unusual way that's difficult to describe. It was very powerful and moving and you can hear some examples at: www.gaelicpsalmsinging.com

In July 2007 I returned to Glencolmcille yet again for the Irish Language and Culture Summer School. This time there were about 150 students, including Mary McAleese, the President of Ireland, divided into eight levels - I chose level 7 and managed to follow most of the things we did in class, which was very interesting. In the afternoons I did a class in sean nós singing, which I really enjoyed. In the afternoons there were concerts every evening with people such as Maighread & Tríona Ní Dhomhnaill, Tadhg Mac Dhonnagáin and Cathal Searcai, after which there were music sessions in the local pubs. I had a fantastic time - shame it only lasted a week.

I attended the Summer School again in July 2008 and it was wonderful to see so many people I knew, and to meet lots of new people. This time I chose level 6 and enjoyed the class, mainly because there were more opportunities to speak Irish then in level 7. In the afternoons I did sean nós singing class again, which was great fun. The evenings concerts included music, singing and storytelling, as well as a talk on the future of the Irish language. I even played the whistle in some of the sessions after the concerts.

I have returned to Glencolmcille for the summer school every year since 2007. I really enjoy my time there, speaking and singing in Irish, and sometimes in other languages, seeing old friends and making new ones, and enjoying the scenery and atmosphere of this special place.