In Devon, and other parts of the UK, visitors, holidaymakers and recent migrants are sometimes referred to as grockles, and in Cornwall they’re known as emmets. These words tend to be mildly derogatory, and partly affectionate.

A friend asked me about the origins of these words, and whether there are equivalents in French, so I thought I’d look into it.

Grockle apparently comes from a cartoon strip about a boy called Jimmy and his pet grockle (a dragon-like creature), which first appeared as Jimmy Johnson’s Grockle in The Rover comic in the 1932, then as Jimmy and his Grockle in the The Dandy in 1937 then as My Grockle and Me in Sparky in 1966.

One story is that Arthur Rivers, who ran the boating-lake at Goodrington in the 1950s, started using the term, which he got from The Dandy. His assistant, Freddie Fly, told Peter Draper, the scriptwriter for The System about it while working at a bar in Torquay.

Another story is that a local man started using grockle to refer to an elderly lady who regularly swan at the swimming pool where he was working one summer. Then other summer workers began to refer to visitors as grockles.

It was popularised by its use in the 1964 film The System, which is set in Torquay in Devon. This is an example of how the word is used in the film:

Most holidaymakers are grockles. But the real ones you can spot a mile off. Usually they wear shorts, woollen socks and black leather shoes, with their shirt undone all the way down the front so you can see the full extent of their manly chests.

A favourite destination in Cornwall for emmets is apparently Porthemmet (which may or may not exist).

Possible equivalents in French include:

Are any of these derogatory? 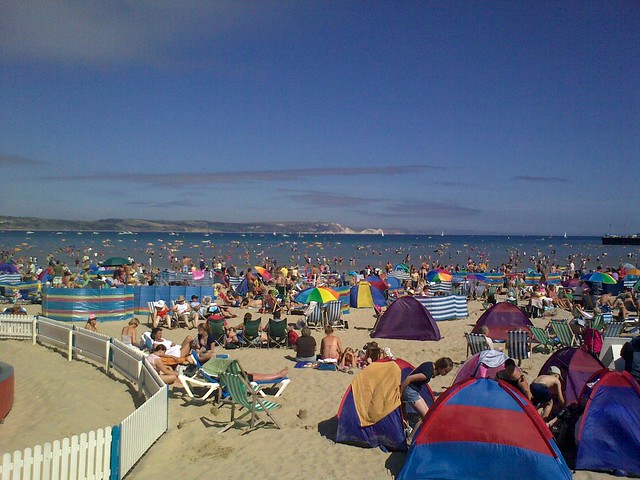 4 thoughts on “Grockles and Emmets”