In this episode I talk about emoticons or “pictorial representation of a facial expression using punctuation or other keyboard characters”. Emoticon is short for “emotion icon” and first appeared in 1994 [source].

Earlier sightings of possible emoticons in the wild include a possibly smiley face in 1648 in To Fortune, a poem by Robert Herrick, an English poet, that appears in The Hesperides & Noble Numbers, a collection of his poems. This appears in only one of the online editions of his work though: 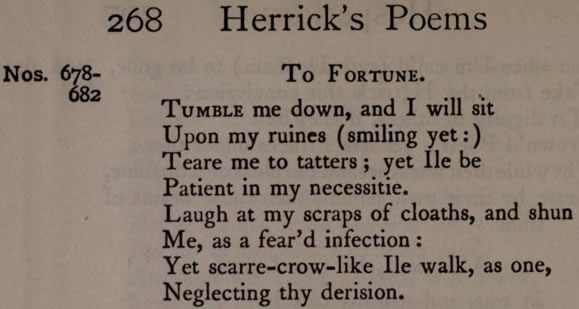 In a transcription of a speech by Abraham Lincoln published in The New York Times on 7th August 1862, a possible wink emoticon appears: (applause and laughter ;), although it is debated whether this was an emoticon or just punctuation.

In 1912 Ambrose Bierce, an American writer and journalist, suggested uses a bracket ‿ to represent a smile, and called it the snigger point or note of cachination [kakɪˈneɪʃ(ə)n] (loud, convulsive laughter).

Other writers proposed ways to use punctuation marks to represent faces, including Alan Gregg, who wrote in a 1936 article in the Harvard Lampoon that (-) could represent a smile, (—) a laughing smile, (#) a frown and (*) a wink.