For decades archaeologists have marveled at the spectacular images of stampeding horses and charging bison left by Ice Age artists on European cave walls. Chauvet, Lascaux, and Rouffignac, all in France, are famous just for that reason.

The figurative art work, done between 10,000 and 35,000 years ago, with so much perspective, color, and shading became the focus, and even obsession. But around the edges of the various animal shapes are small non-figurative geometric shapes. It's not that earlier researchers didn't want to talk about the geometric shapes. They just didn't know what to do with them.

Now Genevieve von Petzinger, a young graduate student at the University of Victoria in British Columbia, Canada, has identified thirty or so unique geometric signs that reoccur in caves throughout the world. Over the past several years she's spent hundreds of hours underground, hiking, crawling, and wriggling around fifty or so sites in France, Spain, Portugal, and Sicily. Her survey is now expanding to hundreds of sites with the incorporation of other researchers' notes. Each marking is entered into her database along with rich metadata, the number that appear, their color, site type and description, adjacent cave paintings, latitude and longitude and date of appearance.

By organizing the signs into a structured database, she is beginning to see how sign patterns spread over geographic distances and how repeated pairings and clusters began to form over time. Much of her work appears in a just released book, The First Signs. She's documented that groupings of signs are duplicated at different sites, verifying huge trade routes spanning thousands of kilometers. 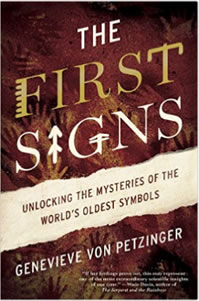 Each geometric sign has its own distinct pattern that can be tracked. Following these trails has been useful to her for discerning cultural connections between regions, as well as for understanding how people and ideas were moving around the glacial landscape. These patterns may also confirm the presence of a developing graphic tradition, making the signs, as well as the Ice Age art in general, a potentially important source of information for understanding the origins of graphic communication.

Von Petzinger believes that the abstract nature of those signs is some of the best proof we have that these images were not being made purely for their aesthetic quality. It suggests a more symbolic role for these markings, and a desire to communicate ideas that were not necessarily easy to depict in a physical form.

She's not talking about writing yet. There's just not enough signs at this point to have represented all of the words in the spoken language, something that is a requirement for a full writing system. Nor do we see signs repeating regularly enough to suggest that there were some sort of alphabet.

Writing systems that rely heavily on pictograms are usually classified as being pro-writing. "If only we could put spoken words to those signs," Leroi-Gourhan said while editing Corpus Lascaux. Von Petzinger argues that the signs suggest the presence of an evolving repertoire of symbolism, something that is a definite prerequisite for language. These pictographic symbols can be interpreted, but they are not being ”read” in the same sense as writing is. But robust research continues, because of von Petzinger, deep into our collective history, to find the origins of graphic marks that gives us more than simple clues about how our ability to communicate has evolved.