Empires of the Word - A review 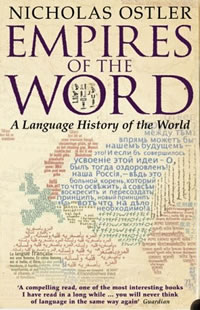 Nicholas Ostler's Empires of the Word (New York: Harper Collins) exudes both the playfulness and the seriousness of its topic, the wandering echoes of languages in ceaslessly competing euphonies.

A reader less in love with languages might settle for calling the book simply a history of languages that looks at the factors which have led to their adoption and abandonment over the millennia. But Ostler seductively writes of "the distinctive traits of various language traditions. Arabic's austere grandeur and egalitarianism; Chinese and Egyptian's unshakeable self-regard; Sanskrit's luxuriating classifications and hierarchies; Greek's self-confident innovation leading to self-obsession and pedantry; Latin's civic sense; Spanish rigidity, cupidity, and fidelity; French admiration for rationality; and English admiration for business acumen." Critics will say he confuses language with culture.

Ostler is a professional linguist and currently chairman of the Foundation for Endangered Languages. His book rests on a foundation of scholarship and erudition so broad and deep that it elicits gasps of admiration. His loving fascination with languages is plain on every one of six hundred pages of analysis, careful transcriptions, pronunciation guides, drawings, photographs, and maps.

After a brief introduction, Ostler uses the first half of the book to describe the spread of languages, mainly by land, from the remotest past up to the Middle Ages. The second half covers the last half millennium, when European languages planted themselves all over the world, carried mainly by sea. In the short final section, Ostler surveys the current language map, and offers some tentative conclusions.

At the outset, Ostler says that he is practicing history sensu strictissimo: recorded history. Though the book is more expository than provocative, Ostler is not frightened by new theories. He gives convincing counter-examples to the notion of simple correspondence between language adoption and military domination. A recurring theme is the idea of language prestige, a quality which may induce people to adopt a spoken language, and later to preserve it as a medium of learning in reverence for its canon of literature, and the social status conferred on those educated in it. "In modern history, "as Michael Breen has written elsewhere, "France's wealth was at the root of the esteem in which French was held by the aristocrats of Russia, just as the prestige of English over much of the Industrial Revolution, and most recently, the economic power of the United States."

It's fascinating that Ostler says nothing to diminish the omnipresence of English as the lingua franca of our age. But he does not think that it will last. His rationale seems to be the record of history, where such universal languages always fail. This, to our good fortune, is the topic of another of his books, The Last Lingua Franca: English Until the Return of Babel, and yet another short review essay in the future.