The Last Lingua Franca, English Until the Return of Babel - A Review 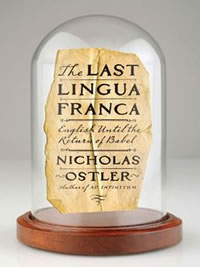 Nicholas Ostler is always informative, thought-provoking, and even challenging. He's an MIT-trained linguist of astonishing breadth whose books are always the purest of nectar for linguists and language historians. So it is with The Last Lingua Franca, English Until the Return of Babel, even with its surprising ending.

The ancient world had Aramaic (the language of Jesus), Greek, Latin, Pali, Persian, Sanskrit, and Sogdian. The modern lingua francas include French, German (until the Third Reich), Latin, Portuguese, Russian, and Spanish. English is the first lingua franca spoken on every continent. There are, of course, many people who think that English will spread without end. Ostler is not one of them.

The heart of his book is about how a lingua franca comes about through conquest, commerce, and conversion. After providing examples of how lingua francas spread, Ostler explains how they meet their demise: What he calls the "Three R's" - ruin, relegation, and resignation.

All of which leads to a fascinating aspect of Ostler himself, a linguistic legend with much more than a working knowledge of nearly thirty languages! Less known is that he has spent much of his career in the development of language technology.

He believes that rapid improvements in that technology eventually will "remove the requirement for a human intermediary to interpret or translate." His bold vision of the future is that printed texts and recorded speeches will be accessible to anyone with the right software as "virtual media."

This techno-optimism rests on a low-cost, low-risk testing ground whose pillars include Google Translate, Babel Fish, and Microsoft's Bing Translator. Yes, the results now are often riddled with amusing mistakes. So Ostler might be accused of utopian over-indulgence. but he is too smart to be dismissed. His formidable erudition certainly includes a complete understanding of subtexts, cultural resonances, idioms, jokes, and puns. As a result, how exactly human ingenuity and technological achievement will save us from the disastrous confusion of a new Era of Babel, when there is no shared language, has to be the exclusive topic of his next ever-more-fascinating book. That will be well worth the wait!