There are various words in Dutch for fence, and apparently the new wooden fence in my garden (see below) is a schutting [ˈsxʏ.tɪŋ], which is definied as “a (usually wooden) solid, or nearly solid, barrier separating two pieces of land; fence” or in Dutch “gewoonlijk dichte afscheiding tussen twee tuinen, stukken land, windvang” [source]. 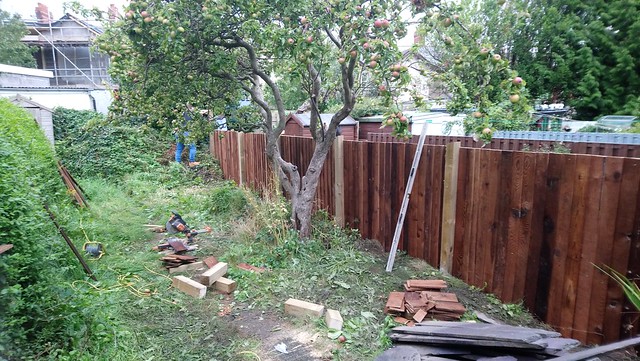 Other Dutch words for fence include:

The notes are based on Google image searches.

Incidentally, someone who remains neutral, does not have an opinion about something, or does not want to commit to something is known as a fence sitter, or someone who sits on the fence. One equivalent in Dutch is op het hek te zitten (“to sit on the fence/gate”). In Welsh a person who does this is known as Sioni bob ochr (“Johnny every side”), or eisteddwr pen clawdd (“hedge sitter”).