I came across an interesting Dutch word today – snorfiets [snɔrfits], which sounds like ‘snore fits’, and means a moped or scooter, particularly one limited to a maximum speed of 25 km/h (15.5 mph) [source]. 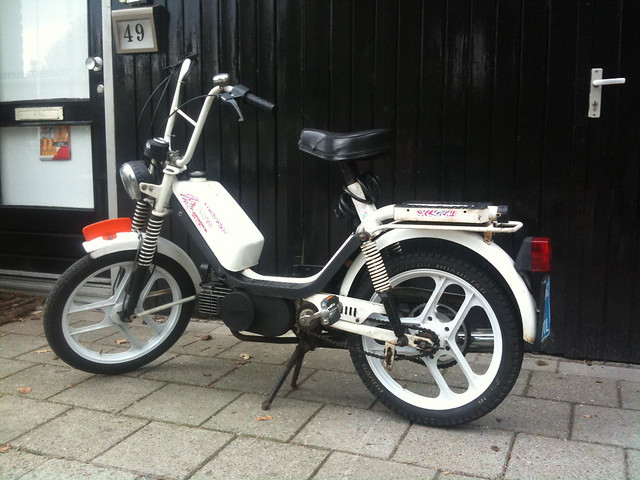 Snor [snɔr] on its own means mustache or whiskers, and when I saw snorfiets I thought it maybe referred to a bicycle with mustache-shaped handlebars, or some other mustache-shaped parts. In fact it comes from snorren (to hum, roar, purr, whirr).

Fiets [fits] means bicycle, and its origins are uncertain. It may be named after Elie Cornelis Viets, a wheelwright from Wageningen who made and repaired bicycles from 1880. It may be an abbreviation of a Dutch version of the French word velocipède, or it might come from vietse/fiette, Limburg and East Brabant dialect words meaning ‘to run fast or move quickly’, or from the older dialect word vietsen (to move quickly). The last exclamation is thought to be the most likely [source].

Bicycles, or fietsen, are quite popular in the Netherlands, so much so that there are more bikes than people there. According to an article in The Brussels Times, in 2018 there were an estimated 22.9 million bicycles in the Netherlands, and just 17.2 million people, or 1.3 bicycles per person.

Other types of fiets include:

One thought on “Snoring Fits”