Luwian was an Anatolian language spoken in central and western Anatolia (modern Turkey) and northern Syria until about 600 BC. It is thought that it was to other languages of Anatolia such as Carian, Lycian and Lydian, and it is possible that there were several varieties of Luwian.

The Luwian hieroglyphic script was used in Anatolia and Syria between 1300 and 600 BC. It was used by the Hittites and other Anatolian peoples for monumental inscriptions and on personal seals. The origins of this script are uncertain: some scholars suggest that it might be connected to other Aegan scripts, particularly Cretan hieroglyphs, others think that it might be an original invention.

This script is also known as Hieroglyphic Luwian or Anatolian hieroglyphs.

Texts in Luwian in a cuneiform script similar to the one used for Hittite have been found at Hattusa, the Hittite capital, and also in the Kingdom of Kizzuwatna in the southeast of Anatolia.

Inscriptions in the Luwian script were first discovered during the 19th century and were defined as Hittite. A number of scholars, including Ignace J. Gelb, Emil Forrer, Helmut Bossert, Bedrich Hrozný and Piero Meriggi identified some logograms in the 1930s, though were unable to make much sense of Luwian texts.

In 1946 a extensive bilingual text in Luwian and Phoenician was discovered in Karatepe in southern Turkey. This made a significant contribution to the decipherment, which was also helped by other texts discovered in Ugarit. Various translations and transliterations of Luwian inscriptions have been published since then. The language of the inscriptions was confirmed as Luwian in 1973 by J.D. Hawkins, Anna Morpurgo-Davies and Günther Neumann.

Scholars at the Oriental Institute of the University of Chicago are currently learning to reading and write the Luwian hieroglyphic script.

A selection of Luwian hieroglyphic logograms arranged according to their Latin meaning, as is conventional.

Luwian words can be written entirely phonetically, or as a combination of phonetic glyphs and determinatives.

Note: this is the reconstructed pronunciation of Luwian with Latin letters that seem to fit best to the sounds. 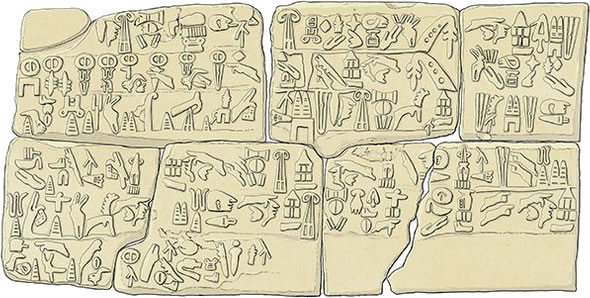