Today we’re investigating the origins of the word dean. 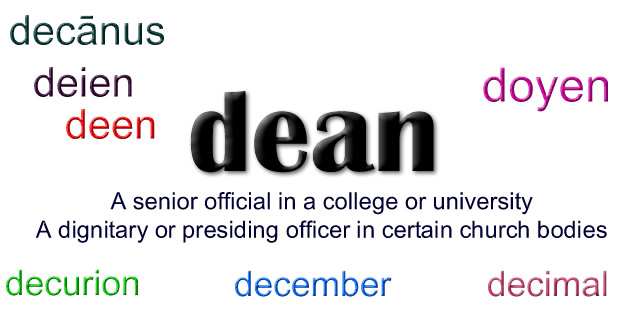 Incidentally, dean is not related to words for person or man in Celtic languages, such as dyn [dɨːn / diːn] in Welsh. and duine [ˈd̪ˠɪnʲə] in Irish. They come from the Proto-Celtic word *gdonyos (person) [more details].

The English word doyen (a leading light, exemplar of a practice or movement, senior member of a group) comes from the same Latin root, via the modern French doyen (dean, senior member) [source].

A related word is decurion (an officer in charge of ten men in the Roman army, a member of the local government in ancient Rome), which comes from the Latin decuriō (decurion, foreman), from decuria (a group of ten men/soldiers, a jury), from decem (ten) and vir (man) [source].

Other words in English that come from the Latin decem (ten) include decimal, decimate, and december (the 10th month in the Roman calendar) [source]. Dime (a coin worth one-tenth of a dollar in the USA and Canada) comes from the Latin decimus (tenth) [source].