Imagine you’re with a group of people who all share a common language, and some of the group may also speak another language. Is it rude for them to speak that language, knowing that some members of the group won’t understand them, and might feel excluded?

Imagine if you worked in an office where everyone speaks Mandarin and English, but you only speak English. Would you tell them to speak exclusively in English all the time, or at least when you’re around?

If you were the boss, you might do so. This was in fact the situation where I worked in Taipei – the boss only spoke English, so we all spoke English with him, while we spoke a mixture of Mandarin, English and Taiwanese among ourselves.

How about if everybody in the group but you speaks a language like Catalan, Basque, Welsh or Irish, would you expect them all to switch to a more-widely spoken language, such as Spanish or English, so you can understand and/or feel included?

At the Welsh music session I go to, we speak mainly Welsh and bits of English. For the native speakers of Welsh, it’s normal to speak their mother tongue, and for the fluent learners like me, it’s a great opportunity to practise the language. Some of the people who come to the session don’t speak Welsh, or are just starting to learn it. However, they don’t complain that they can’t understand, and don’t insist that we speak English. 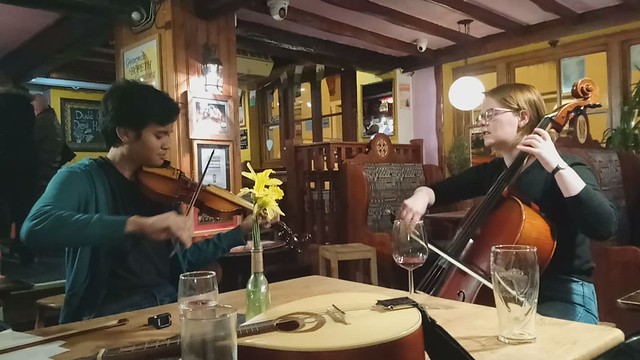 When I hear someone speaking in a language I don’t know, my ears prick up and I try to guess what language it is and what they’re talking about. Sometimes I might even ask them what language they’re speaking. Other people might not react in this way, and may even feel intimidated / irritated if everyone around is speaking in foreign.