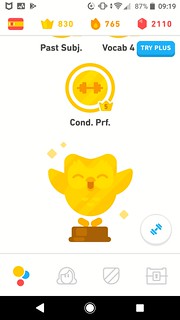 This week I finally completed the Spanish course on Duolingo. I’ve been using it to improve and refresh my Spanish, as I have studied the language with various courses before. I can now understand, read, write and speak a lot more Spanish than before, though need to practise speaking and writing it more.

I first took a placement test on Duolingo to see how much Spanish I already knew, and didn’t start from the beginning. Then I skipped through each level using the tests, rather than working through each lesson individually. Had I done that, it would take a lot longer. For now, I’m not studying Spanish actively anymore, but will use it whenever I get the chance.

Over the past two and a half years or so, I’ve studied languages every day with Duolingo (current streak = 767 days). I’ve completed courses in Spanish, Russian, Swedish, Danish and Esperanto. I also completed the Romanian course, then they added lots of extra levels, and I haven’t gone back to work on those. At the moment I’m focussing on Czech, and will continue to do so, working through every lesson, so it’s going to take quite a while. I don’t plan to start any other languages until I’ve finished the Czech course.

In the meantime, I’ve also been studying Czech, and Russian, on Mondly – Czech for 226 days and Russian for 153 days. I really like their courses and am learning a lot from them.

On Memrise I’m studying Russian, Danish and Swedish. When I started using Memrise nearly two years ago, I already knew some Russian and Swedish. and started Swedish from level 2. I started Danish last year from scratch, although my knowledge of Swedish, and German and English, certainly helps. I’m currently doing level 6 courses in Swedish and Danish, and level 5 in Russian.

By the way, if you sign up to Memrise by 16th September, you will get a 50% discount, and I’ll get a small commission.

I find these apps with the streak counters really encourage me to study every day. It has become a habit to do so, and one I plan to continue for as long as possible.

Apart from these studies, I keep my French and Welsh ticking over by speaking them regularly, and other languages by using them occasionally.

How are your language studies going?

Do you prefer to focus on one language at a time, or to learn two or more simultaneously?

What courses, apps and other resources do you use?