Xinhua is a constructed language and alphabetcreated by Dimitrios Haralampopoulos and inspired by Mandarin Chinese. The writing system is vertical, where each syllable is (generally) represented by one vertical written stack. The next syllable is written to the right of it, following the system's vertical construction. It is quite similar to Korean in that sense, but otherwise has its similarities to other natural languages deeply rooted in Chinese.

Its phonology is identical to standard school-taught Beijing Dialect Chinese, and can be used to write in Chinese as well as Xinhua (新话) , which in Chinese means "New Language". Xinhua sounds similar to Chinese, yet has subtle differences in vocabulary. Such differences would include the fact that Xinhua is non-tonal, and has altered words. For example, the Chinese Character 《木》 (mù) is pronounced as "Mun" in Xinhua. 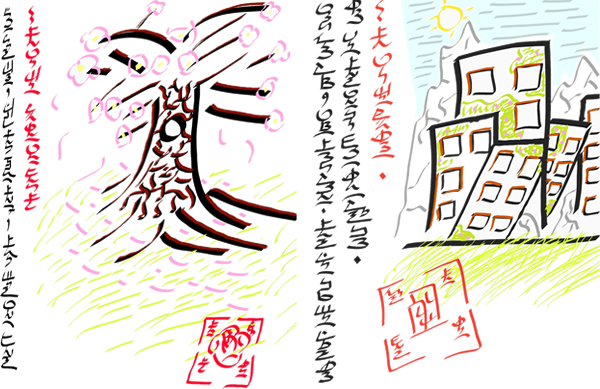