The Elian Script is the creation C. C. Elian. It began as code by which Claudine could, at a glance, differentiate writings in her notebooks that were still in finished form from those still in the works. Over time it has developed into a form of calligraphy.

The structure of the Elian Script consists of the placement of the 26 Latin letters in alphabetical order within a 9-square grid as indicated below:

Each quadrant of the grid is unique in its compositional coordinates, and except for box 9, contains three letters. For example, the quadrant with a floor and a right wall (

By considering a specific box and its contents, we are now considering only three possible letters. To differentiate between these three letters we can agree to keep the box's structural lines equal in length to designate the first letter in alphabetical order.

Then, by making the structural lines of the box unequal to each other in length, we can designate the second letter in alphabetical order.

Finally, we can designate the third letter, in alphabetical order, to appear in a given box by agreeing to make its structural lines unequal in length and by accompanying it with a mark (dot, dash, anything that in itself is not a full line).

For the center box (E, N, W), the main concept is that of enclosed space rather than a specifically a square:

This three-level process then applies to all of the boxes and their respective letters. In addition to these structural parameters there are three compositional principles:

The consistent letter-to-box association and the application of the three principles is the essential structure of this writing system. The overall configuration and style is determined by exercising variables of (among others): line technique, writing instrument, line ratios, and left to right/top to bottom directional changes.

Here is an example of the entire alphabet in one of the many possible fluid forms: 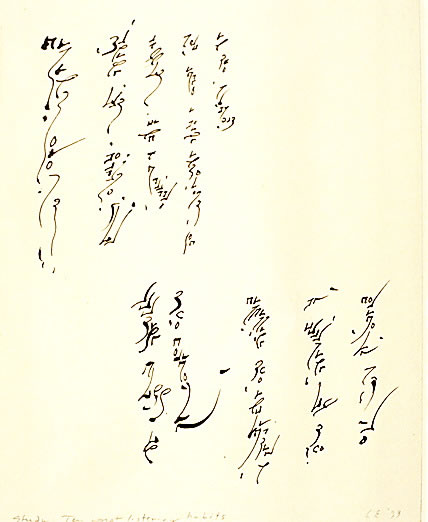 This description is the abbreviated version of the Elian Script's structure; for further details see: http://www.ccelian.com/concepca.html