I arrived safely at Sabhal Mòr Ostaig (SMO) last night. It was raining a bit when I arrived on Skye, and the skies were cloudy this morning, but this afternoon the sun came out and its rather warm. 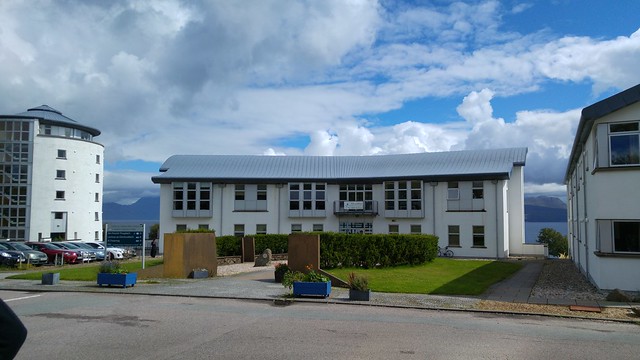 There are quite a few different courses happening here this week, including Gaelic language at various levels, Gaelic for Irish speakers, Gaelic song, and accordion. There was a wine and cheese welcome event last night, and I saw a few people who I know from previous visits to SMO, and met some interesting new people. I spoke some Scottish Gaelic, and quite a bit of Irish and English.

The courses started today, and in the song class we learnt seven songs. I knew some of them already, or had at least heard them before, so they were relatively easy, but others were new to me. The theme of the class is songs from Lewis, one of the Western Isles off the west coast of Scotland. Our tutor, Christine Primrose, is a renowed Gaelic singer from Lewis, and is full of fascinating stories about the songs we’re learning, about the people who wrote them, and about the times when they were written.