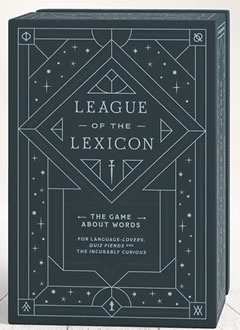 I’ve been asked to let you know about a new language-based quiz game that is being launched today on Kickstarter. It’s called the League of the Lexicon and has two thousand questions related to words and language in five categories, such as etymology, trivia, definitions and usage. There are also two levels of difficulty so younger players can join in.

Linguists and lexicographers around the world have contributed questions to the game, including myself. My question involves mythical beings and Celtic languages.

If you back the game on Kickstarter, you can get hold of two sets of extra questions, or expansion packs – one on slang, cant and all things pertaining to the vulgar tongue, and the other on the world of language, from ancient to modern, Aramaic to Zulu.

Find out more at leagueofthelexicon.com and Kickstarter