An interesting word I learnt yesterday from the Something Rhymes With Purple podcast was snirtle, which means “to try to suppress your laughter (often without success)”. 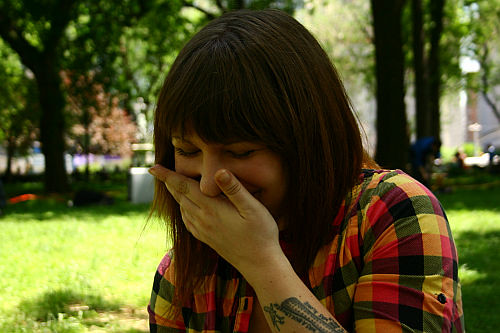 According to the Merriam-Webster dictionary it is Scots and means “to laugh with snorts”, and Wiktionary defines it as “to snigger” or “a snigger”.

According to Dictionaries of the Scots Language /
Dictionars o the Scots Leid, snirtle [ˈsnɪrtəl] is a variation of snirt, which means “to snigger, to make a noise through the nose when attempting to stifle laughter, to sneer”, “to snort, to breathe sharply and jerkily through the nose”, or “a snigger, a suppressed laugh”.

Some related expressions and examples of how it’s used:

Snirtle and snirt are probably initative of the sounds you make when you snirt or snirtle.

Are there words with similar meanings in other languages?