At this time of year various gift givers are preparing to deliver presents. They have different names in different countries and languages. Let’s look at a couple:

In England presents are traditionally delivered by Father Christmas, who has been around in various guises since at least the 17th century. Originally he wasn’t a present giver but rather the spirit of good cheer, and bringing of peace, joy, good food and wine and revelry. He was depicted as a large man wearing green or red fur-lined robes. The first mention of a personification of Christmas in English appears in Ben Jonson’s 1616 play, Christmas his Masque, in which he is known simply as ‘Christmas’. He also went by ‘Sir Christmas’, ‘Lord Christmas’ or ‘Old Father Christmas’ [source].

After the English Civil War, when the Christmas was banned by the Puritan government, the Royalists adopted Father Christmas as a symbol of the ‘good old days’. During the 19th century he became more associated with children, presents, chimneys and so on as the Victorians adopted more child-centric Christmas traditions [source].

During the 19th century Santa Claus, based on the Dutch Sinterklaas (Saint Nicolas), came to the UK from the USA and Canada. Eventually Father Christmas and Santa Claus became synonomous and the names are now used interchangebly.

Other names for Father Christmas in the UK include Father Chrimbo, Daddy Chrimbo, and according to this site, Tabitha the Christmas Hedgehog (in Cumbria), Odin (in Yorkshire), Big Johny Winter (in Northumbria), Joel Noel (in Devon) and Gef the Talking Mongoose (in the Isle of Man).

Meanwhile in Wales presents are delivered by Siôn Corn [ʃoːŋ kɔrn] or “John of the chimney”. I can’t find information about the origins of this name. Does anybody know? 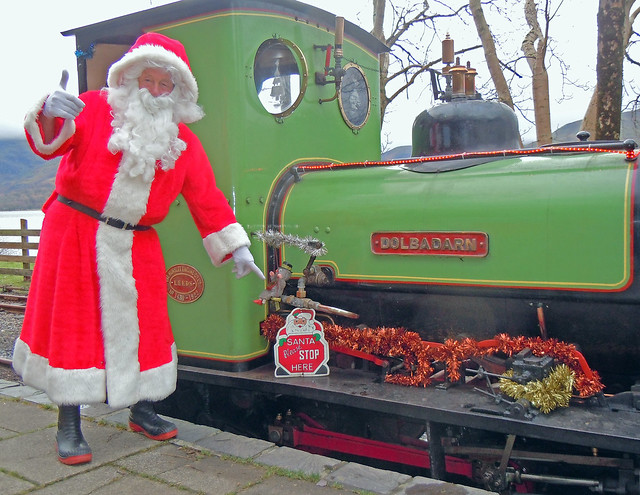 Who brings the presents / gifts where you are?