A desire path is “a path created as a consequence of erosion caused by human or animal foot traffic. The path usually represents the shortest or most easily navigated route between an origin and destination.” They tend to appear as shortcuts where constructed paths are not direct, have gaps, or don’t exist. Desire paths are also known as desire lines (in transport planning), game trails, social trails, fishermen trails, herd paths, cow paths, elephant paths, goat tracks, pig trails, use trails or bootleg trails [source]. 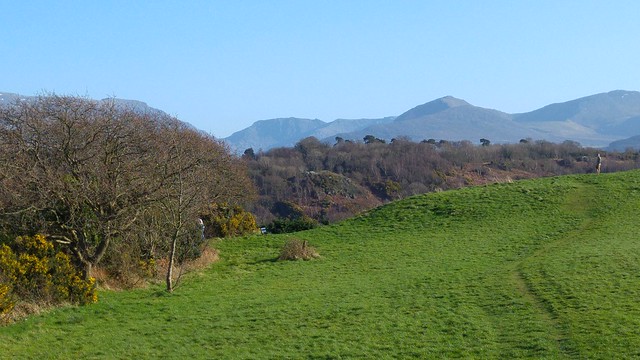 An example of a desire path on Roman Camp in Bangor

In Dutch a desire path is olifantenpad [ˈoː.li.fɑn.tə(n)ˌpɑt] or olifantenpaadje (elephant path) because elephants tend to choose the shortest path to wherever they go, and make paths on the way. These terms became popular particularly in 2011 after the publication of the book Olifantenpaadjes by Jan-Dirk van der Burg and Maarten ‘t Hart, in which they document such paths [source].

When such paths are made by animals, they are known as wildpad, wildspoor or (wild)wissel [source].

Are there other names for them?

Another kind of path is the geitenpad or goat path, which is may be narrow, temporary and dangerous, and may not be recognizable as a path. They are kind of the opposite of olifantenpad.

Other types of Dutch paden (paths) include:

In French a desire path is known as a chemin de l’âne (donkey path) or ligne de désir (line of desire).