Today we have a guest post by Ramon Brena of Avalinguo

When we see the acronym “VR”, we immediately think of headsets and gaming, as well as of fantasy dystopian worlds like in Spielberg’s Ready Player One, where everything, I mean everything, is done in VR.

Well, perhaps not everything in the real world, but could we learn to speak languages in VR? Now that travel is not possible because of COVID-19, could we engage in lively conversations with Parisians in a VR Montmartre pub?

Then, a more basic question, Who are we going to talk to in VR? There are two broad answers to this question, and each of them takes a completely different approach to interaction in VR.

We call the first approach “simulation-based”. As you know, VR has been applied for educational purposes using the VR capabilities for simulating a world, could it be the bloodstream inside arteries in the body, or the working of complex mechanical contraptions, or… the situation inside a taxi in a foreign city.

The cab example was taken from the Mondly-VR app (headset plug-in for the Mondly app), which I bought for my Oculus. They use the synthetic worlds construction capabilities of VR to show you very compelling city views taken from inside the cab. The cab driver turns to you like expecting to have your instructions.

After that, things become a bit awkward. You have to interact with the driver using one of the options written for you on-screen and… Wait a moment, do you have to answer using predefined scripts? Here the magic starts to vanish. Dialogs are not natural, speech recognition leaves a lot to desire, and in general, the interaction doesn’t feel at all like a human conversation where only you know what you want to talk about.

To be fair, Mondly does a good job at the virtual scenario construction, but the interaction engagement wears off very quickly as the novelty fades out. Mondly-VR is available for several VR headsets and builds on top of its popular smartphone app. You can learn the language lessons on the smartphone alone, but of course, in the little cellphone screen, Mondly graphics look far less impressive than with the headset.

We call the second approach for language practice with VR “interaction-based” and it consists of putting in a virtual world the avatars of several humans. In this case, the language practice aspect is taken care of completely by those humans, who converse as they want. In this approach, the interaction is, of course, more natural just because it is done by humans, but then other less obvious problems arise.

There are several general VR platforms that can be used to have language practice conversations, like Mozilla Hubs (web browser-based), High Fidelity (audio only, I have used it for Meetup language gatherings), AltspaceVR (acquired by Microsoft some years ago), and others, which are not specifically intended to be used for language learning, but to some extent could.

I’m rather going to take as an example of this second approach the app Avalinguo, which is specifically intended for language learning (disclaimer: I’m the CEO of Avalinguo). I know, you are going to ask: In which headsets can I run Avalinguo? Right now in none. Avalinguo is a cellphone app. 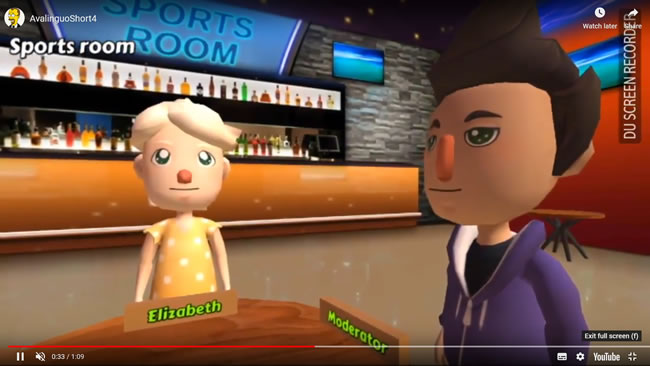 The value of VR in Avalinguo is, first of all, to replace the face and body of the participants by avatars in order to give privacy. You know, talking is the most stressful language learning activity, and research studies have found that many self-conscious or shy people find it difficult to deal with. Some beginners feel judged or stupid when babbling in the language they are starting to learn. Linguists such as Luca Lampariello have proposed to change the attitude and embrace making mistakes, which is a good idea, but we propose to reduce the stress of the situation in the first place, by using avatars instead of showing your babbling face.

Another advantage of VR in Avalinguo (not yet currently released) is that role-playing games, which is one of the best language-learning practice activities, is greatly enhanced by the use of avatars already using a costume like a nurse, travel agent, bell boy, you name it. Other mini-game props such as roulette can be easily implemented, and there are hundreds of ready-to-use graphic resources to plugin.

Now, the distinction between the “simulation” approach and the “interaction” one is not clear cut, because, for instance, the use of costumed-avatars and props is a form of simulation. There is plenty of room for “simulation-interactive” hybrid approaches. The tricky aspect is to build it in such a way that it makes sense from an educational point of view, while at the same time making it entertaining and coherent.