These are the puzzles that have been solved. 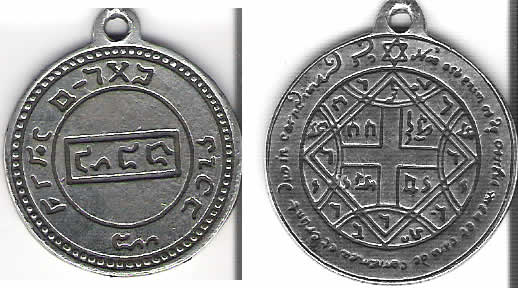 Side A (with the cross) is a pentacle from The Clavicules de Solomon (manuscript No. 248, Bibliotheque de l'Arsenal) meant to "force the spirits of Venus to obey and to compel any woman whatever to come in a moment." Around the circle, the Latin reads: "Hoc est enim os de ossibus meis et caro de carne mea, et erunt duo en carne una" (Genesis 2:23, 24 "This is now bone of my bones and flesh of my flesh . . . And they shall be one flesh").

Side B (with the rectangle in the center) is one side of a two-sided talisman for "being fortunate in gaming or in commerce" from the 1722 Cologne edition of Le Petite Albert. It is atributed to Arbatel. In the middle is the Hebrew word gibur, "Power" or "Powerful [One]" written upside-down. To the left is the Tetragrammaton (four letter name of God, YHWH), written backwards. The other signs seem to be names in reversed letters as well.

Inscription on a spindle shell from Pakistan. 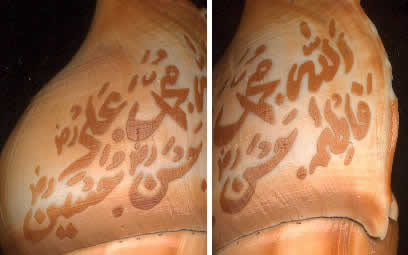 The lines in order from top to bottom and read from right to left: Allah, Muhammad, Ali, Fatimah, Hasan, Husain. 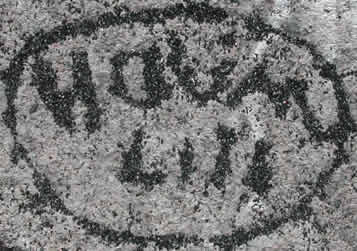 If you have any ideas what it means, please contact Peter Bergholtz of Thacher Island Association: kenbar@aol.com, www.thacherisland.org

The top line reads WAOH the initials of a lighthouse keeper William Albert O. Hale. He left the Island in 1853. The bottom line reads LIII, 53 in Roman numerals.

According to Evans Knight, the script and language on the T-shirt is Thai and it says "Muay Thai" (Thai Kickboxing).

Coin with Arabic script on it

The image below was sent in by Jens Andersson . Jens' great grandmother obtained the coin in Turkey. The date, 1187, corresponds to 1773 in the Western calendar. 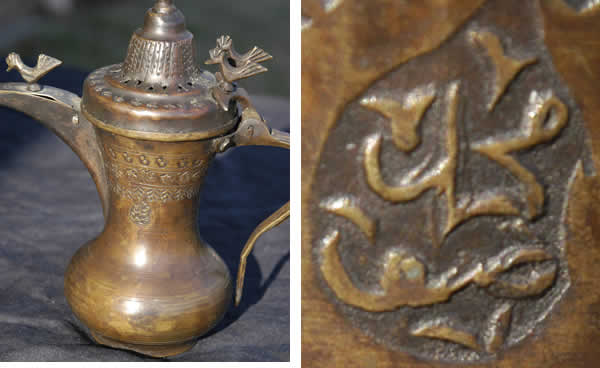 Suggestions by TJ and Evans Knight

The first line of the inscription is "Mohammed". The second line looks like "Ameen", a popular Arab name in some regions. The first line suggests that the piece is not in fact pre-Islamic.

The second line of text reads "sif". The style of the script (ta'aliq) places the piece several centuries after the advent of Islam.

The 'vase' is in fact a porcelain drum . The Chinese characters are a non-standard imperial seal of the Chinese Buddhist hierarchy, and they read "Da De Ji Xiang Chang." The 'Da De' couplet is a reference to a hierarch who has achieved the Tao. The follow-on couplet, 'Ji Xiang', adds shamanic powers to the individual alluded to as the 'Da De.' Finally, 'Chang' is a shortened form of 'Fa Chang Di', a term of praise for the Buddha's "stateliness." This non-standard seal 'represents' the Buddhist hierarchy and was only used in the Xuande period (1426-36).

The other symbols on the drum are Devanagari letters used to spell out the Chinese phrase "Pi Lu Zhe Na Buddha" or "The Five-Fanged Buddha." From this we infer that this aspect of the Buddha was being 'celebrated' when the porcelain drum participated in the religious rites held sometime during the decade 1426-1436.

The photo below is of an inscription on an antique knife purchased by Rick Gremm in Afghanistan in 1970. 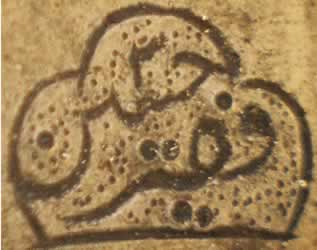 The inscription reads Faqeer Husain, which means "Humble (poor) Husain". It seems to be the name of the knife maker and this way of introducing names is common in Iran.

The photos of the vase below were sent in by Henk Dalmolen. 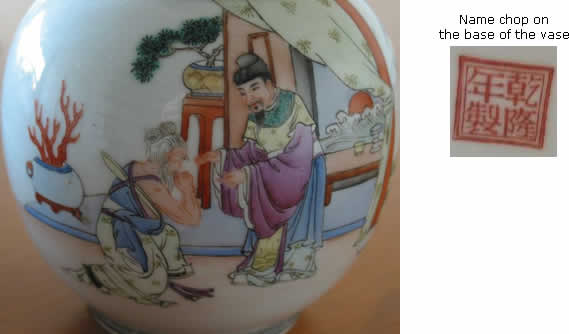 The name chop (乾隆年製 qiánlóng nián zhì) can be translated as "Made during the reign of Qianlong". Qianlong, or Aixinjueluo Hongli, was the fourth emperor of the Qing Dynasty and reigned from 1736-1799.

This means roughly: "asking for punishment by carrying "jīng" (jīng is some kind of plant, once used as a whip) then cutting the throat, together answering the country's request to fight against the king of Qin."

As the painting suggests, the vase tells the story of "fù jīng qĭng zuì". More than 2000 years ago, when China was divided among numerous warring states, an old general was jealous of a younger man named Lìn Xiàng Rú, who gained their king's trust and a prominent position in the government. Later he came to recognize his rival's skills and brilliance therefore was ashamed of himself. He then carried a bunch of "jīng" and asked Lìn Xiàng Rú to whip him (not sure about the throat cutting part, maybe the general tried to commit suicide). Lìn didn't punish him and forgave the general instead. They reconciled and together embarked on the quest to fight off the menacing Qin, which eventually conquered everybody and became the Qin Dynasty.

I think the solution by Hanbing Feng mostly correct, except the part about "chéng wĕn jĭng". "Cheng" means "become", and "wĕn jĭng" literally means cut the throat but the general, namely "lian po", is not considering suicide. The term "wĕn jĭng" here is used as a parable to describe good friends who are willing to die for each other at any time. This kind of friendship is nowadays called "wĕn jĭng jiao", where "jiao" means friendship in this context.

The script is Ranjana used to write Newari. The inscription is the Buddhist mantra "Om Mani Padme Hum"

The script and the language is probably Newari and the inscription means "Salute to mother [Earth]". A rough transliteration is "Jay mutuh di huv".

According to TJ, the writing looks more like the Devanagari alphabet and is something about affection and love.

Unknown writing on a ring

Can anybody decipher the writing on this ring, which was inherited by Michael Diez's mother from her great great grandmother. The script looks like Arabic, but what does it mean? 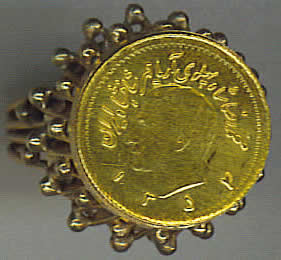 The inscription is in Persian and says, "Mohammad Reza Shah Pahlavi Aryamehr Shahanshahe Iran". This means "Shah Mohammad Reza Pahlavi Aryamehr, king of kings of Iran". Mohammad Reza was the shah of Iran who reigned from 1925 to 1941, his surname was Pahlavi and he gave himself the title Aryamehr. The date on coin is 1352, which is 1933-1934 in the Western calendar. These coins used to be made in gold and people bought them from jewelery stores and gave them as gifts to friends and family in weddings or for the new year. 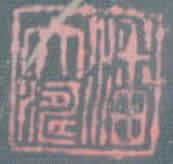 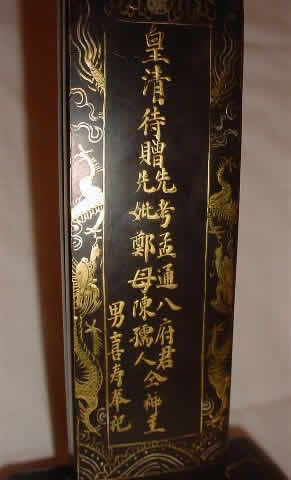 The image below was sent in by Jeff Short (canacatering@sbcglobal.net). Can anyone decipher the Chinese inscription? I know what the individual characters are (see below) but am not sure what they mean together.

Putting it altogether, the inscription possibly means: "Given by the Emperor of Qing to the deceased parents, with god(?), as an offering for a man's (maybe the deceased father's) birthday."

This man must have been very significant and important to receive a birthday present from the Emperor.

The most complex Chinese character?

I recently came across this character. It has 84 strokes and consists of three clouds and three dragons. Does anybody know what it means?

Inscription on a pendant sent in by Brin Kernan 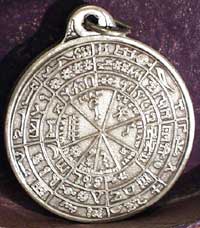 The 'pendent' is actually a Talisman called 'The Prognostikon'. Its name refers to the ancient Greek city of Pergamon (ca. 3rd Century BC), in who's ruins it is said to have been discovered. The inscription in the concentrically arranged circles consists of a multiplicity of magic hieroglyphics and Greek letters. These symbols stand for (among others) truth, revelation, intuition, imagination, self-knowledge, and the connections which determine past present and future.

Its use was to communicate with the world beyond, to focus energies in predicting the future, to broaden one's subconscious and intuitive forces, to help develop supernatural connections, to assist in avoiding undesirable situations, and to aid in developing one's imagination and self-knowledge.

The question was: What does the character consisting of four dragons mean and how it is pronounced? Apparently it means "talkative" and is pronounced zhé. This begs the question: why dragons? and why four of them?