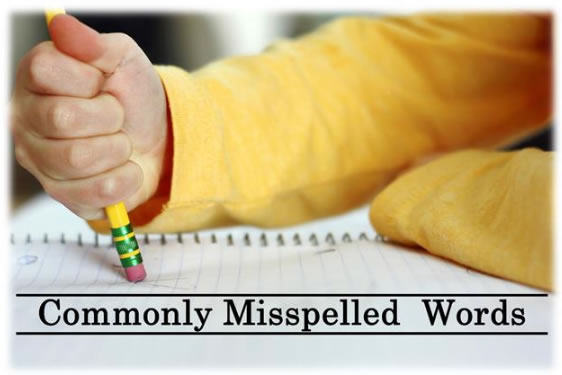 The intricacy of English spelling can create confusion when it comes to writing. The majority of the spelling irregularities are associated with the words that have a similar sound. For example, ‘to’, ‘too’ and ‘two’ have the same pronuciation pronunciation but different meanings.

This is one of the most common errors we encounter in English spelling. There is a subtle difference between ‘A’ and ‘E’ between the two words that changes their entire meaning. The Oxford Dictionaries defines the word ‘accept’ as a verb which means “to consent to receive or undertake”, while the word ‘except’ is defined as a preposition which means not “not including” or “other than”.

Desert and dessert are other examples of commonly misspelled words. The only difference in their spelling is the use of an extra “s” as used in the dessert. According to the Oxford Dictionaries, the word desert describes any area of land which is surrounded by rocks and sand, while the lexicon translates the word ‘dessert’ as a sweet food.

Although ‘they’re’, ‘their’ and ‘there’ are pronounced the same, they have different meanings. The word ‘they’re’ is a contraction of ‘they are’ and it is often used in informal writing. On the other hand, the word ‘their’ is a determiner which is commonly used to show a connection of something to a third-person plural. The word ‘there’ is often used as an adverb to denote a place.

This is another common case of misspelled words. ‘Affect’ and ‘effect’ are mistakenly interchanged even when the two has a different meaning altogether. According to the Oxford Dictionaries, Affect is a verb that means ‘make a difference to’, while the dictionary describes effect as a noun which means ‘a result’.

Although, there is a big difference in meaning between ‘loose’ and ‘lose’, they are commonly interchanged in a sentence due to their similar pronunciation. The Oxford Dictionaries define ‘loose’ as an adjective which means something that is not tightly fixed in a place. While the word ‘lose’ is a verb which is used in a sentence to define that the subject is deprived of something.

I hope this clarifies any confusion regarding the meaning and use of these words.